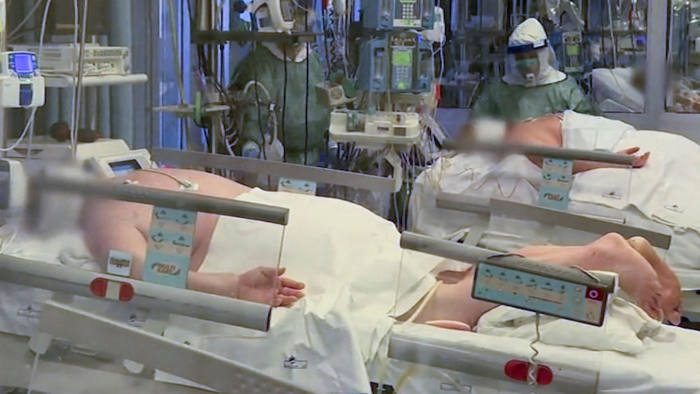 Italian Prime Minister Giuseppe Conte and regional leaders have agreed on new measures to combat the increase in coronavirus infections in the country.

Cinemas, swimming pools and gyms will close in Italy from Monday and bars and restaurants will have to shut by 6 pm, but shops and most other commerce will remain open.

Conte said he wanted to avoid another national lockdown and the economic damage caused by the one Italy faced in spring.

Among the regions pushing for stricter measures was Campania, which contains Naples, where hundreds of people have clashed with police as mainly younger people protested against a curfew imposed in the area.

The Spanish government on Sunday agreed to declare a new state of emergency, which would allow a curfew to be imposed across the country as it continues to battle a resurgence of coronavirus cases.

Regions across Spain will now be subject to a curfew at night from 11 pm until 6 am CET.

Spain was the first western European country to pass the one million coronavirus cases mark.

Both Spain and Italy were badly affected during the first COVID-19 wave in Europe.

WHO warning on hospital capacity

The World Health Organization (WHO) has warned hospitals and intensive care units are running close to or above capacity in “too many countries”, as the coronavirus outbreak continues to surge across Europe.

New restrictions were being rolled out across the continent as countries tried to get a handle on a second wave of the virus, which is causing record numbers of cases.

Across Europe, the number of infections since the start of the pandemic is now above 8.2 million and more than 258,000 people have died from COVID-19.

France, which was the second western European country to surpass one million reported cases, extended a curfew putting at least 46 million of its residents under extra restrictions which are now active.

Germany surpassed the grim milestone of recording more than 10,000 deaths from the virus early on Saturday, making it the sixth European country to do so.

The Czech Republic and Belgium have been particularly impacted by the second wave which started sweeping the continent in September. Both countries have 14-day COVID-19 incidence rates of more than 1,000 cases per 100,000 population.

Authorities in Brussels announced on Saturday they would bring forward a national curfew to 10 pm in the Belgian capital, as well as ordering shops to close at 8 pm and banning cultural and sporting activities.

The new restrictions will come into force on Monday, announced the minister-president of the region Rudi Vervoort.

The Czech Republic logged 15,250 new cases on Friday – its highest ever daily increase.

Fearing the health system could be overwhelmed, army field hospitals have been erected in and around the capital Prague.

In the rest of eastern Europe, several countries rolled out new measures with cases spiralling out of control.

READ  Insurgency: Every lost soul is precious to God whether Christian or Muslim, says Adeboye

The president of Poland, Andrzej Duda, tested positive for the virus, the government said on Saturday.

“Too many countries are seeing an exponential increase in COVID-19 cases and that is now leading to hospitals and intensive care units running close or above capacity and we’re still only in October,” said Dr Tedros Adhanom Ghebreyesus, the WHO’s Director-General at a briefing on Friday.

Elsewhere in the world, the US tallied a record daily high of COVID-19 cases, with the Covid Tracking Project, citing data from local state health authorities, reporting 83,010 new cases on Friday.

Curfews rolled out in Europe

Nighttime curfews are being rolled out or considered in a number of countries in Europe to try to deal with the rise in cases.

France extended its curfew to 38 more departments, where people now have to stay indoors between 9 pm and 6 am. Nine metropolitan areas were already restricted last week.

“We have to do this,” said Macron, as a new record of 42,032 positive COVID-19 cases was recorded in 24 hours on Friday, bringing the total to 1,041,075 confirmed cases since the start of the epidemic in March.

“The month of November will be difficult,” Prime Minister Jean Castex said on Friday, adding that the government could take stricter measures.

Greece’s two main cities, Athens and Thessaloniki, will be subject to a night-time curfew from Saturday.

Polish president Andrzej Duda has tested positive for coronavirus, the Secretary of State for the Polish Presidency said on Saturday, as Poland is facing an upsurge in the pandemic.

“As expected, President Andrzej Duda was tested yesterday for the presence of the coronavirus. The test proved positive. The president is doing well,” Blazej Spychalski tweeted.

Faced with a surge in cases, the whole of Poland on Saturday went into a “red zone”, a measure which until now only concerned the big cities and their surroundings.

Restaurants and primary schools will be partially closed, and high school and university students will practice distance learning. Wedding ceremonies will be banned and the number of people in shops, transport and churches will be strictly limited.

In neighbouring Slovakia, a night-time curfew comes into force on Saturday, until 1 November.

A partial containment is in place from Saturday in Slovenia, where foreign minister Anze Logar tested positive for the coronavirus.