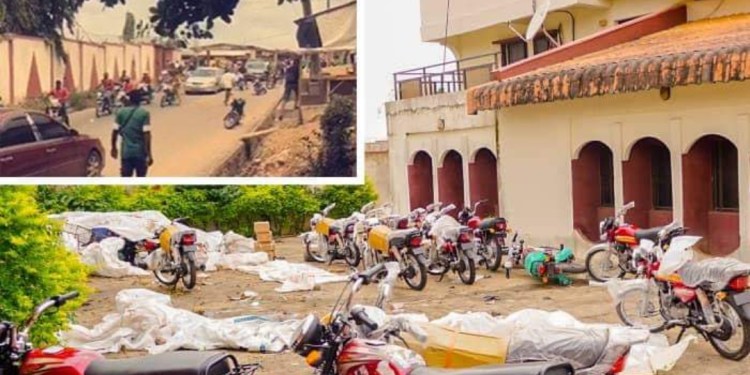 Some hoodlums in Ibadan, the Oyo State capital, hiding under the #EndSARS protest, broke into the Oluyole Ibadan residence of the representative of the Oyo Central senatorial district in the National Assembly, Senator Teslim Folarin, located at Oluyole Estate, Ibadan, on Saturday.

It was gathered that the hoodlums shattered the entrance doors and windows of the politician carting away some of his personal effects worth millions of naira.

The serving Senator confirmed the incident on Fresh 105.9FM on Saturday during a telephone interview.

Folarin stated that no fewer than 300 motorcycles, deep freezers, and food items, which were meant for the empowerment of his constituents, were looted.

He said, “I am relieved because no life was lost.” He, however, did not confirm if the matter had been reported to the police or not.

When visited some youth who are loyal to the politician were seen around the property. They were unwilling to speak with our correspondent. However, some of them were seen threatening to deal with whoever dared to attack the residence again.

The Police Public Relations Officer, Oyo State Command, Mr Olugbenga Fadeyi, who confirmed the incident during a telephone interview with our correspondent, said, “The Divisional Police Officer, Oluyole, is fully aware of the development and the matter is being investigated.

“We shall be able to give the detail on the circumstance surrounding the incident after the investigation has been concluded.”