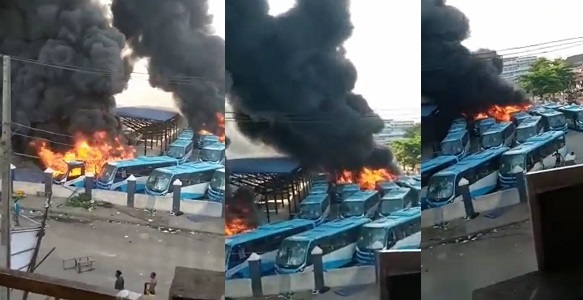 Reject Apology, Tinubu and Sanwo olu are theier slaves, The entire yoruba Kings have been bought over, Most of the governors are now slaves to the North, expeciaclly the governor of Osun state , Only Seyi Mainde is different from them . Seyi is enlightened, A good student of history. Let Hausa GO .

Send all the Hausa employed at the Maritime Back to the North. Yorubas Take over your water ways, Take over your Airports in Lagos, Take over every thing Hausa have taken from you depriving your youths of Job while carting the funds to their kids in the North.

Yoruba this is your opportunity to end the useless Marriage that has brought you all to ridicule. You used to be great people and the Hausas have turned you to slaves. Chase away every Northerner in Immigration and in the the Nigerian Port Authority.

Get your dignity back Take over all the Military barracks in the south, Your OPC can Lock up the Barracks until you trained educated People to manage your Military, You are under subjugation. You are the worst hit in Project Nigeria.

They chased you out of the Army disgracing your military officer and indicted many of them over coup which they planned, Killed the Best of you “Arotile” sent Hausa solder to kill you, employ foreigners to kill your youths as Police men. Yoruba Arise, It is time for Freedom .

Break Jebba Bridge and close Onisha Bridge and Nigeria is over. Any Military personnel who does not speak your Language Reject and attack them . Nigeria was never meant to be a country. Hausa are using their religion to run a country and subjugating the other regions.

Wake Up Yoruba People fight for your children. It is War. The Police being employed by the Trabalistic and nepotistic IG are from the North. Dont accept any bagain. Hausa must return to their tomatoes in the North