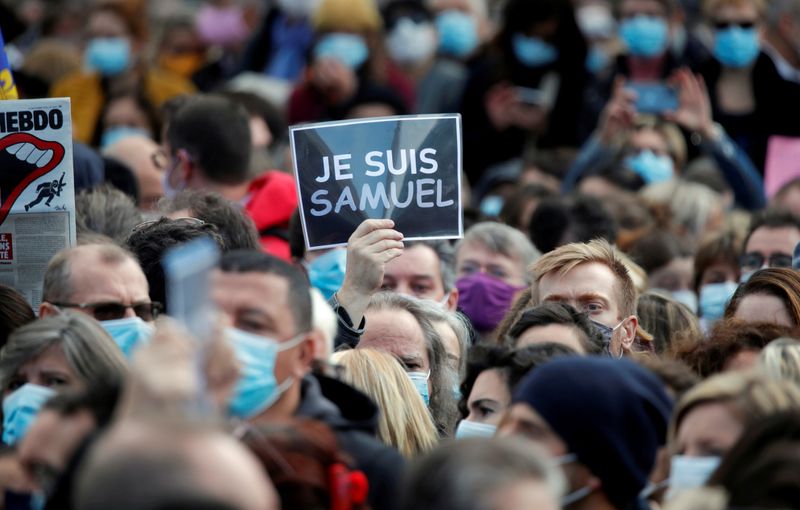 France will pay tribute Wednesday to a history teacher beheaded in a quiet Paris suburb as President Emmanuel Macron promised to intensify a clampdown on Islamist extremism.

Police have carried out dozens of raids, while the government has ordered the six-month closure of a mosque and plans to dissolve a group that supports Palestinian militant group Hamas.

“Our fellow citizens expect actions,” Macron said during a visit to a Paris suburb on Tuesday. “These actions will be stepped up.”

Samuel Paty, a 47-year-old teacher, was attacked on Friday on his way home from the junior high school where he taught in Conflans-Sainte-Honorine, 40 kilometres (25 miles) northwest of Paris.

On Wednesday evening, Macron will attend an official memorial with Paty’s family and some 400 guests at the Sorbonne university, posthumously giving the teacher France’s highest award, the Legion d’Honneur.

Paty had been the subject of an online hate campaign since showing pupils cartoons of the Prophet Mohammed during class on free speech — the same images that sparked a bloody assault on the officials of satirical magazine Charlie Hebdo when they were originally published five years ago.

Seven people, including two minors, will appear before an anti-terrorism judge on Wednesday for possible indictments in Paty’s case, according to a judicial source. Nine other people were freed Tuesday evening.

Killer Abdullakh Anzorov — an 18-year-old originally from the Russian region of Chechnya — was shot dead by police shortly after the assault.

A disgruntled parent who had fired up anger about Paty’s lesson through messages on social media had exchanged messages on WhatsApp with Anzorov in the days leading up to the murder.

The material he uploaded was widely shared, including by a mosque in the northern Paris suburb of Pantin.

The head of the mosque, M’hammed Henniche, said he had shared the video out of fear that Muslim children were being singled out in class.

But the government has now earmarked his mosque for a six-month closure — one of its most significant moves after days of raids and tough rhetoric.

Macron said a pro-Hamas group called the Cheikh Yassine Collective would be dissolved for being “directly implicated” in the murder, adding that a formal decision would be taken at a cabinet meeting on Wednesday.

The group’s founder, Islamist radical Abdelhakim Sefrioui, is being held by police for publishing a video on YouTube insulting Paty.

Macron has also added an international dimension to his anti-extremism efforts, asking Russian counterpart Vladimir Putin for strengthened cooperation in the fight against terrorism during a phone call on Tuesday.

Russia has played down any association with the killer, saying Anzorov had never been in contact with their officials and had left the country more than a decade ago.

Paty’s beheading was the second knife attack claimed in the name of avenging Prophet Mohammed since a trial started last month over the Charlie Hebdo killings in 2015 when 12 people, including cartoonists, were gunned down for publishing Mohammed cartoons.

The role of social media platforms has once again come under the spotlight after much of the anger against Paty was whipped up on Facebook.

Paty’s teaching colleagues said in a statement they were deeply concerned about the impact of social networks, which they called “a real scourge” for their profession.

The government has promised to create a new criminal offence that would punish anyone who endangers another person by publishing their details online, and ministers held talks with the French bosses of social networks on Tuesday to discuss the fight against “cyber-Islamism”.

The killing has prompted an outpouring of emotion and solidarity in France, with tens of thousands taking part in rallies over the weekend across the country.

Parliament observed a minute of silence on Tuesday and thousands gathered for a silent march in the teacher’s honour in Conflans-Sainte-Honorine that evening.

The next edition of Charlie Hebdo, meanwhile, will feature the headline “The decapitated Republic” on its front page along with cartoons representing various professions, the weekly said Tuesday.

“These murderers want to decapitate democracy itself,” reads the editorial, to be published Wednesday.