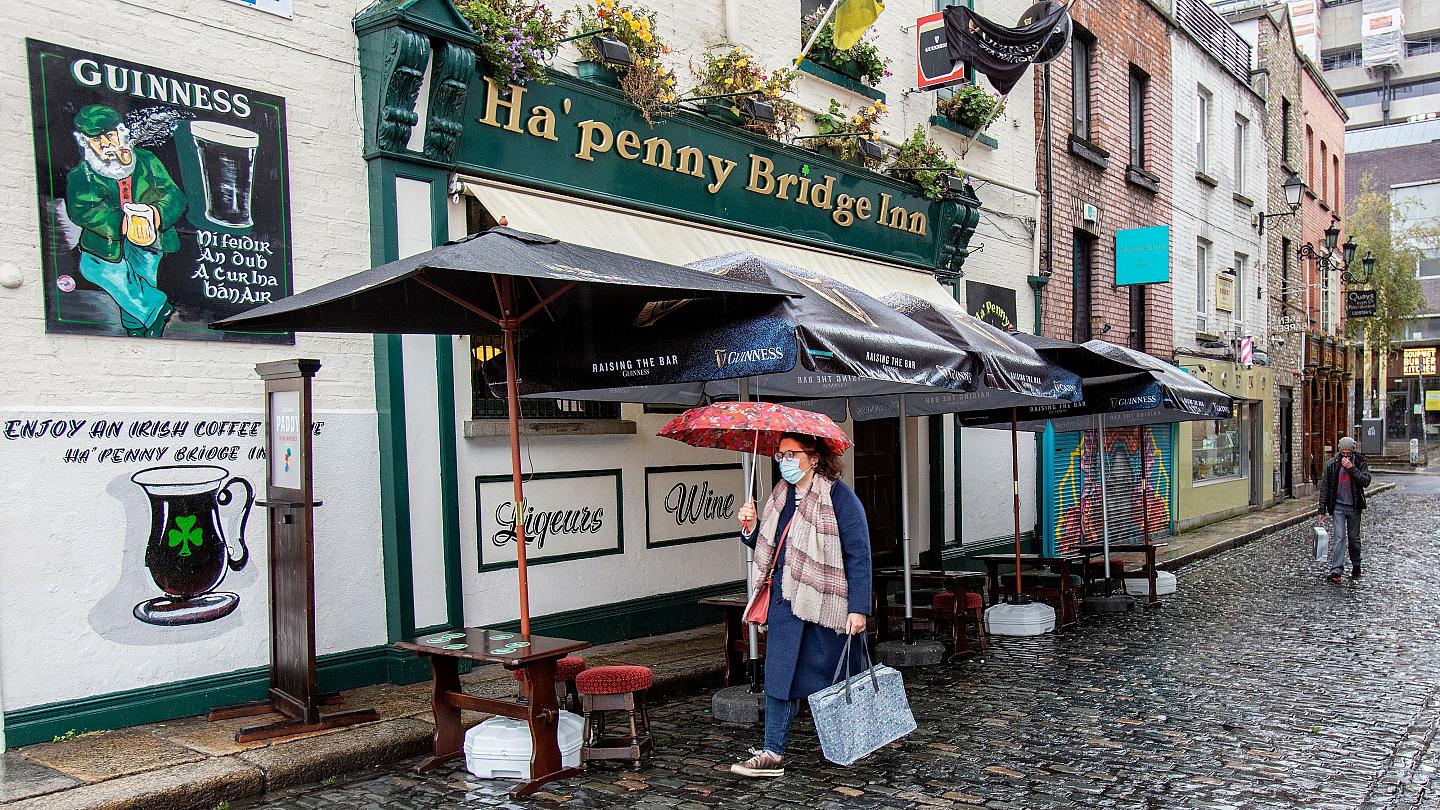 Measures coming into effect in Ireland for six weeks from midnight on Wednesday will see all non-essential retail businesses close and pubs and restaurants limited to takeaway or delivery service only.

“Everyone in the country is being asked to stay at home,” the prime minister said in a televised national address.

Only essential workers will be “permitted to travel to work”, he said, and citizens will be allowed out to exercise only within five kilometres (three miles) of their residence.

The government warned in a statement that “there will be a penalty” for violating the five-kilometre restriction and that public transport will operate at 25 percent capacity to serve essential workers only.

Martin said schools and childcare facilities are to remain open “because we cannot and will not allow our children and young people’s futures to be another victim of this disease”.

A ban on visits between different households and on indoor events will also be extended, although two households will be allowed to mix at outdoor venues such as parks.

A “social bubble” programme will also allow those living alone, at risk of social isolation or mental health issues, to mingle with one other household.

And unlike under the previous shutdown order issued in March, elite and professional level sports will be permitted behind closed doors across Ireland — which has suffered 1,852 deaths from the coronavirus.

“If we pull together over the next six weeks, we will have the opportunity to celebrate Christmas in a meaningful way,” he said.

Lobby group Retail Ireland predicted “tens of thousands of retail workers will be out of work” in the interim.

“It is crucial that these measures work and we are in a place to reopen retail in advance of Christmas,” warned director Arnold Dillon.

“We simply cannot contemplate serious rolling restrictions into the future.”

Martin said the government’s aim was to move from Level 5 restrictions back down to Level 3 by December 1. That would allow all retailers to reopen and restaurants to serve 15 customers outdoors. Even then, another lockdown could not be ruled out in 2021, he added.

23/21. Ireland is facing one a worrying surge in its #COVID19 epidemic activity, which will continue to increase at high levels, with increasing low to medium levels of mortality, for 7 more days. The country has decided again to full lockdown for two weeks from Thursday. pic.twitter.com/SUppEkOrC9

Ireland has generally taken a cautious stance in fighting the fight against coronavirus.

There are currently no “green list” countries on the nation’s register of safe travel destinations and the government enacted pub closures dubbed “Europe’s longest”.

But Dublin’s decision to return the nation to lockdown comes two weeks after the government rejected a similar recommendation from public health chiefs.

At the time, Deputy Prime Minister Leo Varadkar said the advice to take the country to a four-week lockdown “hadn’t been thought through”.

The coalition government’s admission that a longer six-week lockdown is now necessary could leave it vulnerable to accusations it stalled the public health response to the surging virus.

Daily deaths from the coronavirus in Ireland peaked at 77 in April and in recent weeks have consistently remained in the single digits, with none registered Monday.

However, like many other nations, the Republic is witnessing a resurgence in confirmed infections of the virus, with 1,031 new cases registered on Monday.

While countries struggling with high rates of infection like Belgium, the Netherlands and France have shut bars, restaurants and imposed a nighttime curfew, none have such strict travel restrictions within the country as Ireland.

Harder hit Northern Ireland last week shut schools for two weeks and restaurants for four, although most retailers remain open. In Wales, people have been asked to stay at home in a two-week “fire-break” lockdown announced on Monday.

Welsh First Minister Mark Drakeford said Monday that his administration was backing a short, sharp “firebreak” to slow the spread of Covid-19. All non-essential retail, leisure, hospitality and tourism businesses will close for two weeks beginning at 6pm Friday — a lockdown similar in scope to the UK-wide measures imposed in March.

We are all tired of coronavirus and want this pandemic to end but right now we only have a small window of opportunity to act.

A fire break is currently our best chance of regaining control of the virus. This is the time to come together again to protect our NHS and save lives. pic.twitter.com/x42lhCSxjm

“This is the moment to come together to play our part in a common endeavor to do everything we can together to protect the (National Health Service) and to save lives,” Drakeford said.

Drakeford said the Welsh lockdown will definitely end on November 9th. “The benefit will be seen in the weeks that follow,” Drakeford said.

Meanwhile on the continent, Belgium — where hospitalisations rose 100 percent in just the last week — closed bars and restaurants on Monday for a month and reinforced a curfew overnight.

Italy, the initial epicentre of Europe’s outbreak, also announced fresh curbs including earlier closures for bars and restaurants and a push to increase working from home.

France imposed its own overnight curfew from the weekend in nine cities including Paris, affecting 20 million people, with a record 32,400 new infections reported on Saturday.

Slovenia followed suit, with its roughly two million inhabitants forced to stay home between 9pm and 6am from Tuesday and banned from non-essential travel.

Europe passed the milestone of 250,000 deaths from Covid-19 on Sunday, according to an AFP tally.