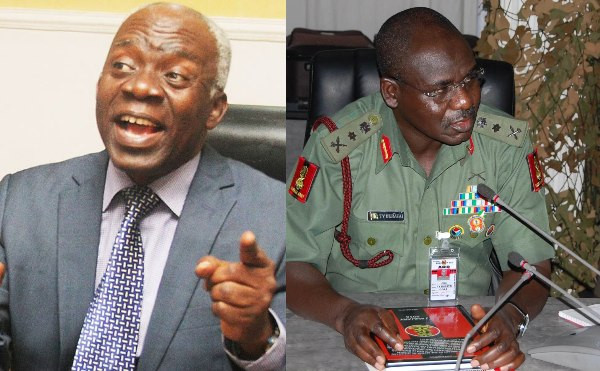 The Coalition for Nigeria Movement (CNM) has warned human rights lawyer, Femi Falana and others against blackmailing the Nigerian Army’s operation ‘Crocodile Smile’.

According to the group, insinuation by Falana that soldiers will be used to quell the EndSARS protests across the country is totally false.

The army announced on Friday that its annual exercise will commence on Tuesday to identify, track and “counter negative propaganda” in the social media and across the cyberspace.

The operation, which is the first ever cyber warfare exercise to be conducted in the history of the African Armed Forces, will also include identification component aimed at identifying Boko Haram terrorists fleeing from their base.

In a statement signed by its Secretary-General, Ainoko Idoko, on Monday, the CNM said there is a deliberate plot to drag the troops into the EndSARS protests across the country to instigate the people against the Nigerian Army.

Idoko said Falana and his co-travellers are agents of destabilization ignorant of the innovations introduced by the Chief of Army Staff Lt. Gen. T.Y Buratai and are instead propelled by the kickbacks they have received to cause disintegration of Nigeria.

The Coalition for Nigeria Movement, however, advised Falana to retrace his steps and act patriotically in the interest of the nation.

The Coalition for Nigeria Movement is in receipt a statement credited to The Alliance for the Survival of COVID-19 and Beyond, and signed by its Chairman, Femi Falana alleging plots to use soldiers to quell the EndSARS protests across the country.

In the statement, Femi Falana stated that the Chief of Army Staff, Lt Gen Tukur Buratai, or any of his men risk facing the International Criminal Court in the Hague if any of the protesters were killed.

The Coalition for Nigeria views such statements as callous, and a continuation of the deep-rooted hatred Femi Falana and his shadowy group has for the Nigerian Army in its efforts in tackling the various security challenges in the country.

As a first, Femi Falana and his group made an unsubstantiated allegation that was hinged on a deliberate plot to drag the Nigerian Army into the EndSARS protests across the country to instigate the people against the Nigerian Army.

It is consequently appalling that a man of Femi Falana’s standing as a lawyer does not know that making wild and unsubstantiated allegations is a crime that is capable of instigating conflict in the country.

It is also despicable that Femi Falana and his group would elect to condescend so low to playing to the gallery and for pecuniary benefits by acting as agents of foreign forces bent on destabilizing Nigeria.

This is on the heels that it is a known fact that Femi Falana is known to be an instigator of conflict which has been his stock in trade from time immemorial through his actions and inactions in the country.

There is also sufficient reason to state that Femi Falana has always been against the Nigerian Army and the current administration through the suggestion that the recently launched Operation Crocodile Smile is aimed at killing protesters.

The Coalition for Nigeria Movement views this stance as absolute balderdash and a figment of the imagination of Femi Falana and his paymasters that intend to take advantage of the street protests to perpetuate their evil agenda against Nigeria.

READ  Coronavirus 'may never go away', WHO says

The Coalition for Nigeria Movement is constrained to state in unequivocal terms that Femi Falana and his co-travellers are agents of destabilization that are propelled by the kickbacks they have received from some sources to cause for the disintegration of Nigeria.

It is thus our considered opinion that it is indeed time for Nigerians to see through the Femi Falana gimmick as his actions and inactions are not for the interest of the people, but instead for his pocket which has grown so fat in recent times from the kickbacks he has received in return for his ignoble actions towards the Nigerian Army and by extension the Nigerian government.

While it is understandable that Femi Falana is more of a businessman than a lawyer, he should realize that Nigerians are now aware of his business model and are ready to resist him moving forward.

The Coalition for Nigeria Movement wishes to inform members of the general public that the Nigerian Army in the past five years has transformed into a professional force through the efforts of the dynamic leadership of the Chief of Army Staff, Lt. Gen. Tukur Buratai, who has introduced notable reforms in the operations of the Nigerian Army especially in the area of the entrenchment and preservation of human rights.

Femi Falana must indeed wake up from his slumber and desist from issuing unguarded public statements that are aimed at distracting the Nigerian Army in its quest towards addressing the myriads of security challenges in the country.

The members of the unsuspecting general public must also not allow itself to be deceived by the antics of Femi Falana as he is arguably the number one enemy of the people as he has proven to be the medium through which the agents of destabilization wants to achieve their aim against peace and unity in Nigeria.

The Coalition for Nigeria Movement is using this medium to warn Femi Falana to retrace his steps and act patriotically in the interest of Nigeria. Enough is indeed enough of his atrocious actions and inactions against the Nigerian Army.