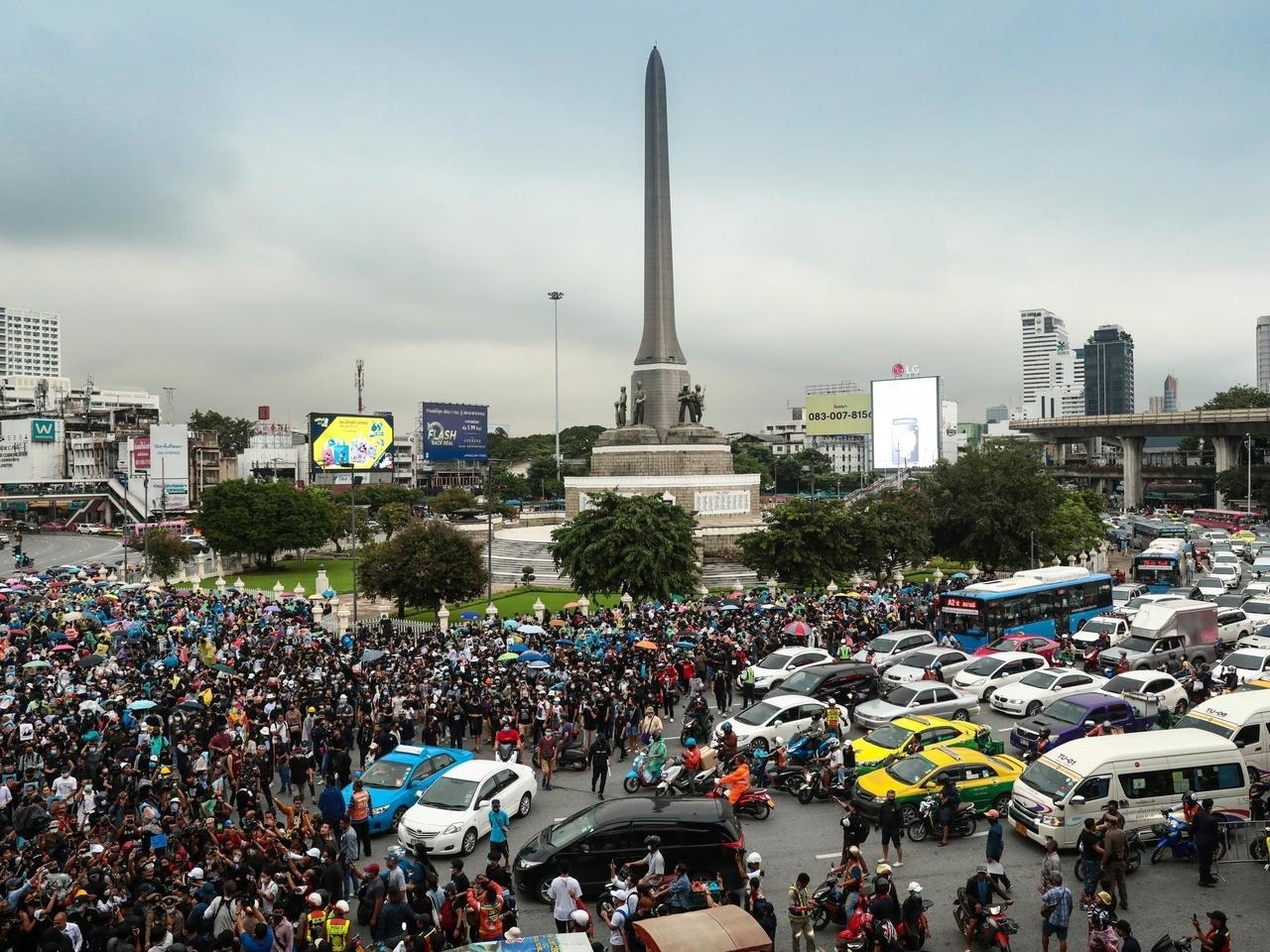 Tens of thousands of protesters defied a ban on gatherings of more than four people to mass at a major Bangkok landmark Sunday, carrying posters portraying activists detained in four straight days of strident anti-government rallies.

The youth-led movement has suffered several blows this week, with scores arrested after demonstrators surrounded a royal motorcade and flashed “democracy salutes” at Queen Suthida.

The government reacted with emergency measures – including banning gatherings of more than four people in Bangkok – and the arrest of protest leaders who have called for the removal of Prime Minister Prayut Chan-ocha, a former military chief brought to power in a 2014 coup.

But the crackdown has served only to embolden the movement’s mostly young supporters, who have turned up in large numbers to rallying points announced at short notice in a bid to outwit authorities.

“If they defy it, police will do whatever is necessary to enforce the law,” he said.

But police kept a low-key presence Sunday as local media said more than 20,000 people descended on the landmark from late afternoon shouting “Free our friends” while carrying posters of those arrested.

Those portrayed included human rights lawyer Anon Numpa, Parit “Penguin” Chiwarak, and Panusaya “Rung” Sithijirawattanakul – three of the most recognisable faces in the movement and who have consistently called for reforms to the monarchy.

Among their demands is the abolition of a draconian royal defamation law – which shields King Maha Vajiralongkorn from criticism – and a call for the monarch to stay out of the country’s turbulent politics.

This sign on a Bangkok road is now a tourist attraction. pic.twitter.com/Y3DD9l9o5w

Once-taboo in Thailand, the demands for royal reform is one of the biggest challenges facing the kingdom’s conservative military-aligned government.

“There are groups of people claiming the monarchy for their own benefit and to get rid of their political opponents,” said a 24-year-old graduate who asked not to be identified.

“We will not get true democracy if there’s no monarchy reform,” he told AFP.

Victory Monument, one of Bangkok’s busiest thoroughfares, was blocked off by protesters, but they made way for emergency vehicles and sent supplies down human chains formed along streets leading to the roundabout.

Since the movement started in July, the social media-savvy protesters have harnessed unorthodox ways of spreading their messages, sending alerts through newly formed groups on Telegram – a secure messaging app – and borrowing tips from Hong Kong’s pro-democracy protests.

Another protest site in Asok, a popular shopping and restaurant district, drew a smaller group of protesters.

Gatherings were planned across the country – from Phuket in the south to Khon Khaen in the northeast, where students held up a portrait of Prayut with the words “Get out” scrawled on it.

So far, charges against the protesters have ranged from breaking emergency measures to sedition.

On Friday, however, two activists were charged under a rarely used law banning “violence against the queen” – carrying a maximum sentence of life in prison if convicted.

Authorities defended their use of force on Friday, saying it was according to “international standards”.