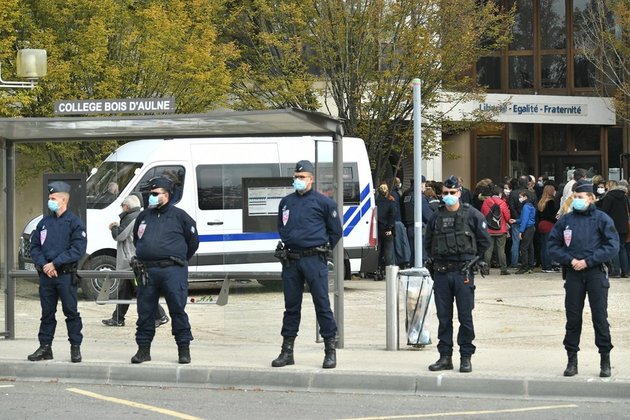 French police arrested another five people who may have been involved in the beheading of a man in a Paris suburb on the night from Friday to Saturday, news agency reports Reuters based on sources. Those arrested would include the parents of at least one of the pupils, while another would be a minor.

TEACHER IS SAID TO HAVE SHOWN CARTOON OF PROPHET MOHAMMED

A total of nine people were arrested. French media previously reported that four of them are from the family circle of the perpetrator, but the police have not confirmed this.

The French news agency AFP reports that the perpetrator is an 18-year-old male of Chechen descent. He was shot by officers after the beheading when he threatened them with a knife.

French President Emmanuel Macron spoke of an “Islamic terrorist attack” on Friday evening. The prosecutor for terrorism cases has been appointed to investigate. It is not yet clear whether the eighteen-year-old man received help.

The victim was stabbed and beheaded on Friday in Conflans-Sainte-Honorine, northwest of Paris. The man was a secondary school teacher, according to the French police. Sources say he showed his students cartoons of the Prophet Mohammed.

“A civilian was murdered because he was a teacher and taught freedom of speech,” Macron said earlier. “The country stands behind all teachers in the country”. According to the president, France will respond “quickly and with authority”.

Former Prime Minister of France, Manuel Valls, has called on the French press to publish cartoons about Mohammed from the satirical magazine Charlie Hebdo. “All students should be able to see these cartoons and then explain what happened here,” quote French media.