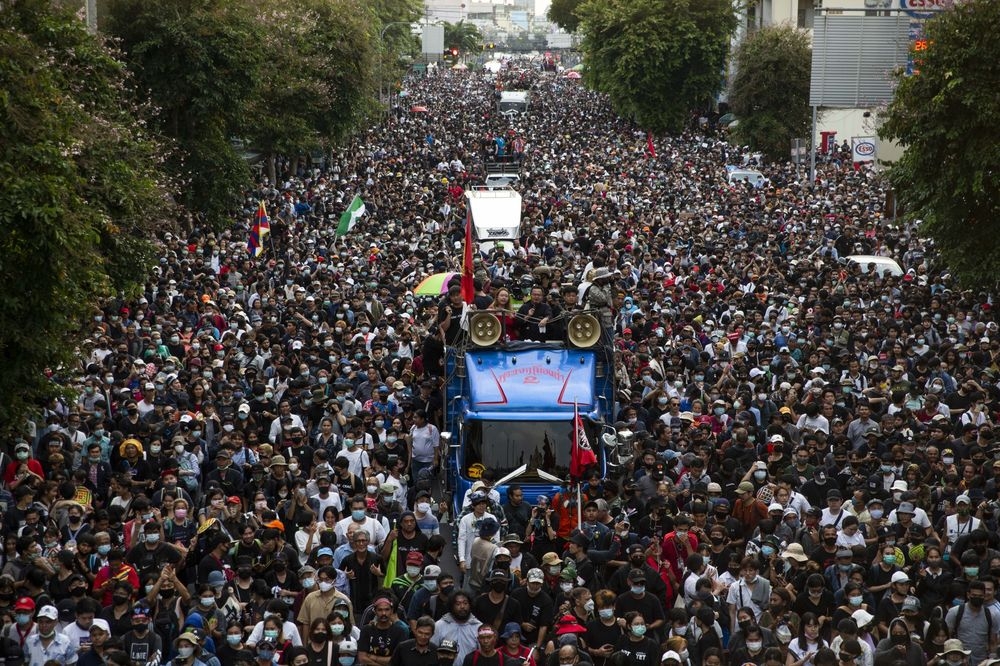 From shops, offices and schools they spilled onto a Bangkok street in their tens of thousands, voicing shock and anger and above all defiance.

Thailand’s government had announced emergency measures to ban gatherings of five or more people to try to end three months of protests. The response was one of the biggest demonstrations so far, in the heart of the capital.

“I’m not afraid. Emergency or not, I have no freedom,” said 26-year-old illustrator Thanatpohn Dejkunchorn, who left work early to attend the protest with friends. “I want freedom to exist in this country. I want it to be free from this vicious cycle.”

Protests have built since mid-July in the biggest challenge in years to the political establishment – seeking the removal of Prime Minister Prayuth Chan-ocha, a former junta leader, and to curb the powers of King Maha Vajiralongkorn.

“We have to create understanding with the protesters,” government spokesman Anucha Burapachaisri told Reuters, complaining that protest leaders were not giving protesters “complete information.”

Police said they would arrest all protesters, though they did not explain how they would charge tens of thousands of people.

The Royal Palace has declined all comment on the protesters or their demands.

Until Wednesday, the government had largely allowed demonstrations to happen, while making no sign of meeting protesters’ demands.

But that changed after an incident in which protesters jeered Queen Suthida’s motorcade as she and the king were paying a rare visit from Europe, where they spend most of their time.

The government cited that as well as the risks to national security and the economy from protests and the danger of spreading coronavirus as reasons for imposing emergency measures.

The government then launched a crackdown, sweeping away a camp set up outside Prayuth’s office and arresting three protest leaders – among around 40 arrests in the past week.

Protesters want to oust Prayuth, who first took power in a 2014 coup, saying he engineered election rules last year to keep his position – an accusation he denies. Breaking a longstanding taboo, protesters have also challenged the monarchy – saying it has helped entrench decades of military influence.

They gathered in the shadow of upmarket shopping malls and shiny tower blocks that are home to multinationals and other businesses in Southeast Asia’s second biggest economy.

But the Ratchaprasong Intersection also has a historic resonance for protesters. In 2010, it was the scene of bloodshed as security forces cracked down on Red Shirts who battled pro-establishment Yellow Shirts during a decade of turmoil.

“I’m not afraid. I’ve been chased by guns,” said beef noodle seller Thawat Kijkunasatien, 57, a veteran of the bloody crackdown a decade ago and another in 1992.

“Wherever the kids go, I go,” he said at the protest while sipping a can of beer.

One characteristic of the latest Thai protests has been the extent to which they are led by students and other young people. Most protest leaders are in their 20s, but an even younger generation is following.

From giving the three-finger salute of protest when the national anthem plays at school to tying white ribbons in their hair and on school bags as symbols of protest, high school students have rallied to the campaign.

READ  Covid-19: New cases coming down, but hospital admissions and deaths are rising

Many left school to join Thursday’s protest – among them 18-year-old Tan, who came along after finishing school exams. He declined to give his full name for fear of reprisals.

“I make sure I’m prepared for exams before I go to protests. I have to give importance to both things,” he said. “We can’t let it go on like this, or it will never end.”