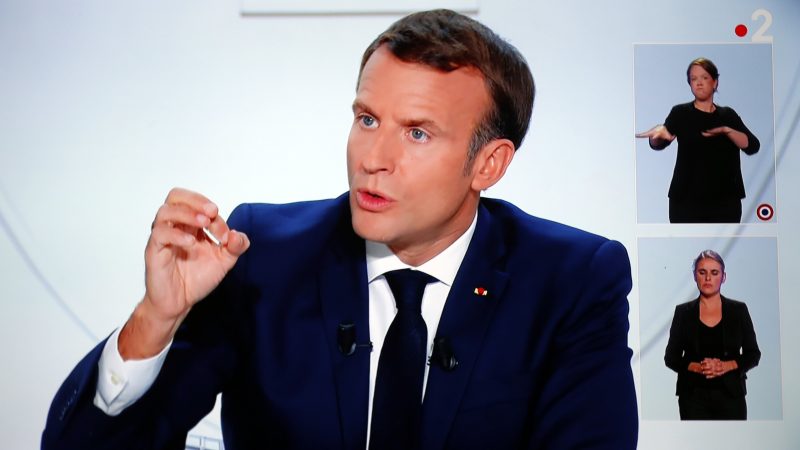 France on Wednesday became the latest European country to toughen anti-coronavirus measures, imposing a curfew in Paris and eight other cities from Saturday, while Germany and Ireland also ramped up restrictions.

“We have to act. We need to put a brake on the spread of the virus,” President Emmanuel Macron told public television, announcing a shutdown between 9:00 pm and 6:00 am that will remain in force for as long as six weeks.

Other major French cities such as Lyon, the Mediterranean port of Marseille and southwestern Toulouse will similarly impose curfews, with around 20 million people affected in all, out of a total population of some 67 million.

Just minutes before Macron’s announcement, his government had said it would prolong a state of health emergency.

With over one million coronavirus deaths and nearly 40 million cases worldwide, regions like Europe that suppressed the first outbreak are again facing tough choices on how to control a new wave without the economic devastation wrought by nationwide lockdowns.

Paris Mayor Anne Hidalgo called on Parisians to respect the measures and “remain united”. “Faced with the heavy circulation of #Covid_19 in France and in Paris, we must remain united and apply the measures announced by the President of the Republic, even if they are harsh. It is a new ordeal, and we will face it, together and in solidarity with caregivers”, she tweeted.

Marine Le Pen, head of France’s far-right party Rassemblement National, on the other hand, deemed Macron’s announcements regarding “financial aid to the affected sectors must be broader, faster, less complex than those implemented so far. Thousands of businesses will not survive without massive and immediate support”, she tweeted.

“I am convinced that what we do now will be decisive for how we come through this pandemic,” the leader said.

New infections in Germany continued to rise Wednesday, pushing past 5,000 cases in 24 hours – a level not seen since a lockdown imposed on Europe’s biggest economy in the spring.

“We’re in a situation where I think we can still flatten the exponential growth,” said Lothar Wieler, head of Germany’s disease control agency. “But for that we all need to make an effort.”

In Spain, bars and restaurants will close across the northeastern region of Catalonia for the next 15 days as the country tackles one of the highest rates of infection in the European Union, with nearly 900,000 cases and more than 33,000 deaths.

In the Netherlands, where new measures also came into force, including restrictions on alcohol sales and new mask requirements, people drank and danced to pumping techno music in the final minutes before all bars, restaurants and cannabis “coffeeshops” closed down.

Ireland’s prime minister Micheal Martin announced a raft of new curbs along the border with the British province of Northern Ireland, including the closure of non-essential retail outlets, gyms, pools and leisure centres.

Infection rates “must be turned down now or we will be in a very difficult place very soon indeed,” First Minister Arlene Foster told lawmakers in the Northern Ireland Assembly.

Johnson said a new UK-wide lockdown would be a “disaster” but refused to rule it out as the government’s science advisory committee endorsed a temporary shutdown.

And in Italy, authorities recorded 7,332 new cases on Wednesday – the highest daily count the hard-hit country has yet seen.

Rome has already imposed new, tougher rules to control the virus’ resurgence, including an end to parties, amateur football matches and snacking at bars at night.

Beyond Europe, the US death toll rose by 794 in a day to 216,597, according to Johns Hopkins University, with just three weeks before a crucial election in which the pandeic plays a central role.

Iran on Wednesday announced new travel restrictions affecting the capital Tehran and four other major cities, as well as new single-day records in both Covid-19 deaths and new infections.

And neighbouring Iraq’s death toll since the start of the pandemic passed 10,000 people.

At least 1,089,039 people worldwide have died of the coronavirus since it emerged in the Chinese city of Wuhan late in 2019, according to an AFP tally using official figures. At least 38.3 million cases have been recorded around the world.

In online talks, G20 finance ministers and central bankers agreed to extend a moratorium on debt repayments by the world’s poorest countries for a further six months and trailed another prolongation in spring.

The virtual talks, hosted by current G20 president Saudi Arabia, came a day after the International Monetary Fund warned that global GDP would contract 4.4 percent in 2020 and the damage inflicted by the pandemic would be felt for years.

As Europe imposed new restrictions, hopes for vaccines or treatment to provide relief suffered a blow with the suspension of two clinical trials in the United States.

US pharmaceutical firm Eli Lilly said Tuesday it had suspended the Phase 3 trial of its antibody treatment over an unspecified incident, the second in less than 24 hours after Johnson & Johnson ran into a similar problem with its vaccine candidate.