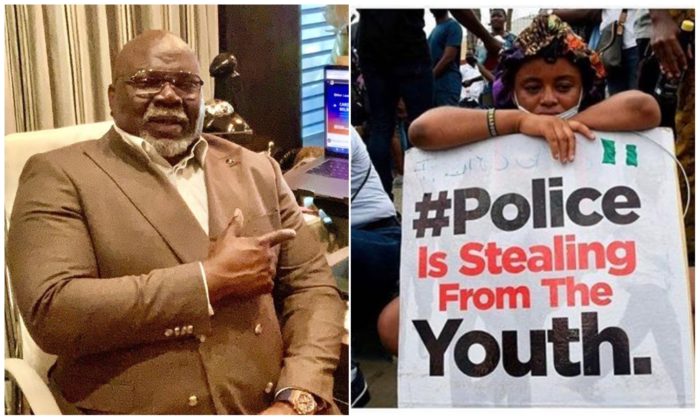 In the past few days, Nigerian voices have echoed across most part of the globe causing reactions from prominent persons across various Spheres of life, clamoring for the end of police brutality and scrapping of the Special Anti-Robbery Squad (SARS); a unit of the Nigerian Police Force blighted by accusations of kidnapping, murder, theft, rape, torture, unlawful arrests and detention, humiliation, extrajudicial killings, and extortion.

Renowned cleric, T.D Jakes has joined the growing list of international personalities, to clamor against the incessant killing of Nigerians by the controversial police unit, SARS.

The bishop while emphasizing that the lives of the Nigerian citizens matter, opined that, injustice anywhere is a threat to justice everywhere.

On Sunday, Drake shared an #EndSARS post from Grace Ladoja, the Nigerian-British talent manager and socialist who is best known for being Skepta’s manager. “Pls check this post from my family for the info @graceladoja,” Drake captioned the post along with a Nigerian flag emoji.

Other international celebrities that have also reacted or spoken out in support of the #EndSARS protest include Cardi B, Sean “Diddy” Combs, Trey Songz, Big Sean, John Boyega, Chance The Rapper amongst others.

Also, on Monday, American singer Trey Songz blasted Buhari and questioned the rationale behind the decision to redeploy members of the SARS squad when the government announced that the group has been dissolved.