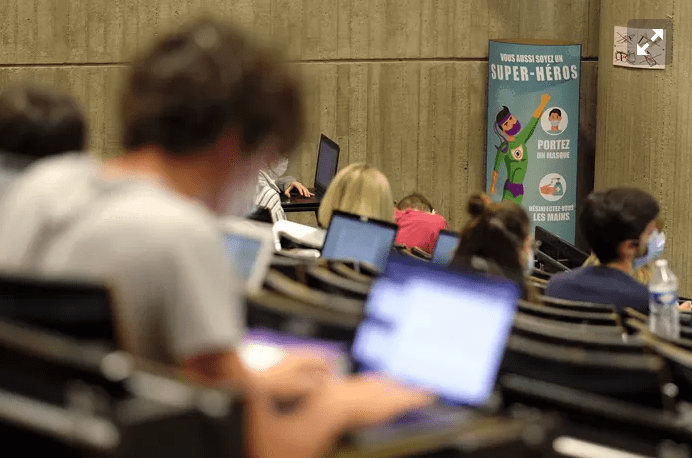 The university city of Louvain-la-Neuve in Belgium reported on Tuesday hundreds of new coronavirus infections among students, one month into the new academic year.

A total of 600 students in the small French-speaking city tested positive for Covid-19, in news which come as its wider province, the Walloon Brabant, imposes a two-week curfew to curb climbing infection rates.

The vice-dean of the Université Catholique de Louvain (UCLouvain) said that university staff have been struggling to raise awareness among the roughly 30,000 students about the spread of the virus.

“We have done so much to make students aware of the consequences of their behaviour, but that doesn’t help,” Philippe Hiligsmann told VRT.

The city’s wider municipality, Ottigny-Louvain-la-Neuve, is the second most affected one in the Walloon Brabant in terms of cases diagnosed in the last fortnight, according to the latest figures by Sciensano.

Last week, officials in the planned student city, created to host the university, said that student life was the main driver of a steep rise in the number of new infections and hospitalisations that had placed the wider province on maximum alert.

“Young people in the Walloon Brabant [province] are particularly affected by the spread of the epidemic,” the city wrote on Facebook, quoting Governor Gilles Mahieu as he linked the rise of cases with off-campus gatherings.

“This is mainly due to gatherings in kots [student dorms], improvised parties or other festive events neglecting the respect of measures,” Mahieu said in a statement.

On-site classes are currently ongoing at the UCLouvain as the university continues under code yellow, according to the latest update of it coronavirus website on Monday.

It is unclear at this time whether the rise in the number of cases among the student body will lead the university to crank up to code orange, which would mean sending more students back to distance-learning.