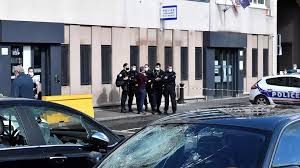 Dozens of people armed with fireworks and metal rods besieged a police station outside Paris early Sunday, authorities said, prompting new calls for tougher government action after a string of attacks on France’s security forces. No one was injured in the latest attack.

Two police officers were on a cigarette break outside the station in Champigny-sur-Marne, around 12 kilometres (eight miles) east of Paris, when the assailants suddenly converged shortly before midnight.

The officers barely managed to barricade themselves inside when the crowd began attacking the entrance and several police vehicles, while others launched a barrage of powerful fireworks against the building.

No injuries were reported.

The city’s mayor, Laurent Jeanne, told AFP the police might have been targeted in retaliation for a recent scooter accident allegedly caused by police, “which has not been proven.”

French Interior Minister Gérald Darmanin tweeted that “these little dealers don’t scare anyone, and will not discourage our anti-drug work”, though police officials did not identify the attackers.

Darmanin’s office announced later that he would meet Tuesday with police unions, who have been pressing for months for concrete measures to improve working conditions.

Prosecutors said that an arrest reported on Sunday was not related to the attack, adding that surveillance cameras were being reviewed for clues.

The attack was the latest among numerous attacks against police officers, and sometimes firefighters, that Darmanin said are a sign that France is growing “savage.”

Last week, two police officers in civilian clothes were pulled from their vehicle in a Paris suburb and shot multiple times with their own guns. One officer remains in serious condition.

President Emmanuel Macron is to meet with police unions on Thursday to find ways to protect officers, the interior minister said on a visit Sunday night to Champigny-sur-Marne.

“The police are the (French) Republic and the Republic is the police,” he said. He said the attack was another sign of the “great savageness” he claims is undermining French values. He linked the attack to a police crackdown on drug dealers and, using street language, said it was aimed at ”smashing cops.”

‘No longer any respect for law enforcement’

Police unions said the attack near Paris underscored a growing threat against law enforcement officers in depressed suburbs of Paris and other large cities.

Tensions have long run high in these densely populated and often poor areas where large immigrant communities have long complained about police brutality and racism.

“There is no longer any respect for law enforcement, and unfortunately the government has not succeeded in changing this trend,” Frederic Lagache of the Alliance police union said Sunday.

“What will it take for the government to commit to protecting its security forces?” he said.

The Unite SGP union said the Champigny attack proved that officers “are at risk of being attacked even on their station’s doorstep.”

“These are literally scenes of war,” Valerie Pecresse, the rightwing leader of the Ile-de-France region that encompasses Paris, told BFM television as she visited the Champigny station on Sunday.

“The interior minister needs to increase the number of officers in neighbourhoods hit hardest by organised crime,” she said.

Several other police stations across France have been targeted in similar fireworks attacks this year, and the Champigny-sur-Marne station had already been hit by youths wielding fireworks, most recently last April.

“But that was just kids acting out during the lockdown” imposed to curb the coronavirus, Jeanne said.

“This was something totally different — they wanted to physically injure these two officers,” he said.