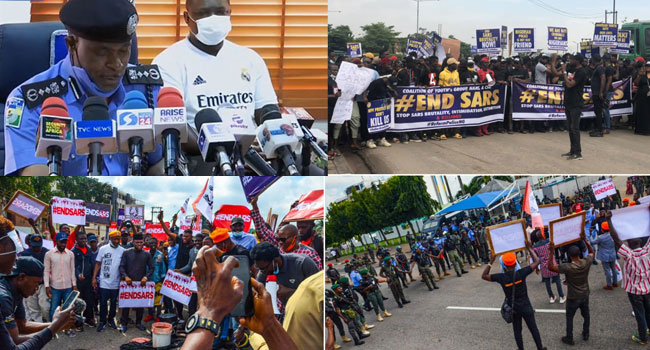 The Inspector-General of Police, Mohammed Adamu, has dissolved the infamous subunit of the force, the Special Anti-robbery Squad (SARS).

Adamu made the announcement of the dissolution on Sunday, days after widespread protests demanding a scrapping of the unit over allegations of brutality and human rights violations.

“The Special Anti-Robbery Squad of the Nigerian Police, otherwise known as SARS, is hereby dissolved across all formations, the 36 state police command and the Federal Capital Territory where they currently exist,” the IGP said.

The unit was founded in 1992 to combat cases of armed robbery, kidnapping, and other violent crimes. But SARS, instead, over time, has gained notoriety for its reckless intimidation of innocent civilians through puerile profiling and wanton abuse of power. Protestors carry a placard reading “Special Anti-Robbery Squad SARS Are Authorised Criminals” during a demonstration calling for the scrapping of the controversial police unit, in Ikeja, on October 8, 2020.

Calls for the unit’s disbandment date as far back as 2017 and while the Federal Government and police chiefs have made several pledges to implement reforms, reports of SARS’ brutal activities against civilians have not abated.

The current wave of protest can be traced to October 3, after another report of extra-judicial killing in Delta State (the police have denied any killing took place).

It sparked fresh concerns and anger. Fuelled by this, and the outpouring of tales of traumatic experiences at the hands of officials of the unit, many Nigerians have held protests in many states, including Lagos, the Federal Capital Territory, Kaduna, Osun, Edo, and Imo. The IGP at the press conference on Sunday, however, noted that the current developments and the outcry by sections of Nigerian have remained under constant monitoring and due assessment by the government.

He also noted that the government acknowledges the inalienable rights of citizens to freedom of association and expression.

Also in a statement, the Force Public Relations Office, Force Headquarters, Dcp Frank Mba, said: “the dissolution of SARS is in response to the yearnings of the Nigerian people”.

He explained that “the Force is not oblivious of the ever-present need to combat armed robbery, kidnapping and other violent crimes in the country which was before now the core mandate of the erstwhile Squad”.

Mba, therefore, assured that a new policing arrangement to address anticipated policing gaps which the dissolution of SARS would cause has been evolved and shall be announced in due course.

With the new development, all officers and men currently serving in the unit are now expected to be redeployed with immediate effect.

According to the IGP, new policing arrangements to address the offences of armed robbery and other violent crimes that fall within the mandate of the Special Anti-Robbery Squad will also be presented in due course. He further noted that a citizens’ and strategic stakeholders’ forum will be formed to regularly interface with the leadership of the police at all levels and advice on police activities.

Beyond that, Adamu said an investigation team to deal with the reports of crimes committed against citizens, will be constituted and will include civil society organisations for transparency as culprits will be punished. Speaker of the House of Representatives, Femi Gbajabiamila, speaks during a meeting in Abuja on February 5, 2020.

The Speaker House of Representatives, Honourable Femi Gbajabiamila, has also unveiled some of the plans by the House, aimed at tackling police brutality in the country.

In a statement signed personally on Wednesday, Gbajabiamila said over the next 30 days, the House will work with the Nigeria Bar Association (NBA), civil society and with Nigerians of good conscience to draft new legislation that establishes a system of independent accountability from the Force.

According to him, the new legislation will hold erring members of the Police Force to account for their conduct in the performance of their duties and impose civil and criminal liability for violations of the Police Code.

It will also compel the Nigeria Police Force (NPF) to take responsibility for the failures of training and discipline that leads to such violations.