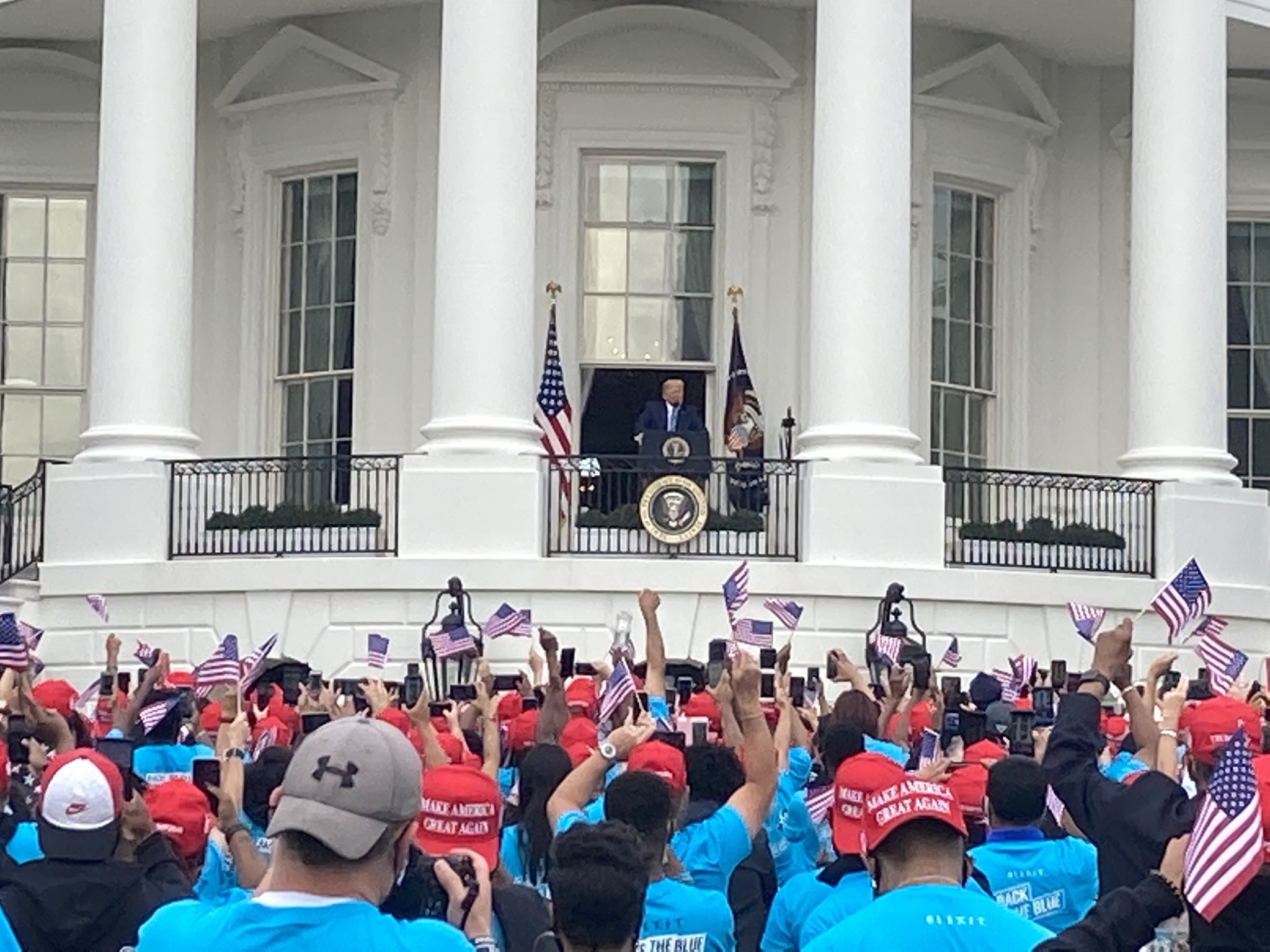 US President Donald Trump made his first public appearance since returning to the White House on Monday from a three-day stay in hospital for Covid-19, a disease his doctor says he is no longer at risk of spreading.

Trump spoke from the White House balcony at an event called “a peaceful protest for law & order”, attended by a few hundred people standing on the lawn below. His appearance is seen as a first step towards resuming full campaigning next week.

Trump appeared maskless, declaring from the White House balcony: “I am feeling great.”

“I want you to know our nation is going to defeat this terrible China virus,” Trump told the cheering crowd, most wearing masks but with very little social distancing at the outdoor event.

‘We’re going to vote them into oblivion,’ Trump boasts at White House event

“It’s going to disappear, it is disappearing,” the president said of the virus, which has killed more than 210,000 Americans and severely dented his chances of winning a second term on November 3.

The White House doctor announced late Saturday the president was “no longer considered a transmission risk”.

Tests showed there was “no longer evidence of actively replicating virus” and that Trump’s viral load was “decreasing”, Sean Conley said – though he did not state that the president was virus-free.

Guidelines from the Centers for Disease Control and Prevention say that, for mild or moderate Covid-19 cases, isolation and precautions can be discontinued 10 days after symptom onset, and once patients have been fever-free for 24 hours. However, the severity of Trump’s illness has not been confirmed.

The Republican president will travel on Monday to central Florida, a state crucial to his re-election hopes.

He will stage his first campaign rally since his coronavirus diagnosis at an airport in the town of Sanford. The campaign did not disclose if it would be held in a hangar with doors open, as it has in the past, or entirely outside.

As the president prepared to return to the trail, the body that oversees presidential debates said the debate between Trump and Biden, the Democratic candidate, scheduled for October 15 had been formally canceled.

Trump refused to participate in what was supposed to be the second of three debates with Biden after the Commission on Presidential Debates switched it to a virtual contest in the wake of the president’s illness.

The final debate on October 22 is still set to take place.

Questions remain whether Trump, who announced on October 2 he had the virus and spent three nights in a military hospital, is still contagious.

In an appearance on Fox News on Friday evening, Trump said he was tested again for the virus but did not disclose the result. He also said he had stopped taking medications to combat it. “I feel really strong,” said Trump.

The illness had kept him from holding public rallies and attending fundraisers at a critical juncture of the campaign. He trails Biden in opinion polls with just weeks to go before the election.

Attendees at the Florida rally will be given a temperature check, masks that they will be encouraged to wear and access to hand sanitiser, the campaign said.

Biden sharply criticised Trump’s decision to resume campaigning. “Good luck. I wouldn’t show up unless you have a mask and can distance,” he told reporters in Paradise, Nevada. Trump and his administration have faced criticism for their handling of the pandemic, as well as for a lax approach to mask-wearing and social distancing in the White House and – in recent days – confusing messages about how ill the president has been.

At least 11 people who attended a White House event on September 26 where Trump announced his nomination of Amy Coney Barrett to the Supreme Court have since tested positive.

Dr Anthony Fauci, a member of the White House coronavirus task force, on Friday called it a “superspreader event”.

“It was in a situation where people were crowded together, were not wearing masks. So the data speak for themselves,” Fauci told CBS Radio.

‘He wants to be out there’

Nine Covid-19 cases have also been linked to a Trump rally in Bemidji, Minnesota on September 18, the state’s health department said on Friday, according to local media.

White House spokeswoman Kayleigh McEnany said the president was eager to resume campaigning but would do so safely. “He wants to talk to the American people, and he wants to be out there,” she told Fox News.

“There are medical tests underway that will ensure that when the president is back out he will not be able to transmit the virus,” McEnany added.

With Trump’s management of the pandemic dominating the campaign, a new Reuters/Ipsos poll showed Americans steadily losing confidence in how he has managed the health crisis – with his net approval on the issue hitting a new low.

McEnany is one of a string of Trump aides, including his campaign manager, who have tested positive in the last week as the virus spread within the White House and Trump campaign.

Biden has continued to campaign during Trump’s illness, spending the day in Las Vegas, Nevada.

At a drive-in rally where people attended in vehicles, Biden ripped Trump for careless behaviour since being infected with the virus.

“His reckless personal conduct since his diagnosis, the destabilising effect it’s having on our government is unconscionable. He didn’t take the necessary precautions to protect himself or others. And the longer Donald Trump is president, the more reckless he gets,” said Biden, who gave the entire speech wearing a surgical mask and his signature aviator sunglasses.

The attendees honked horns to sound their approval.