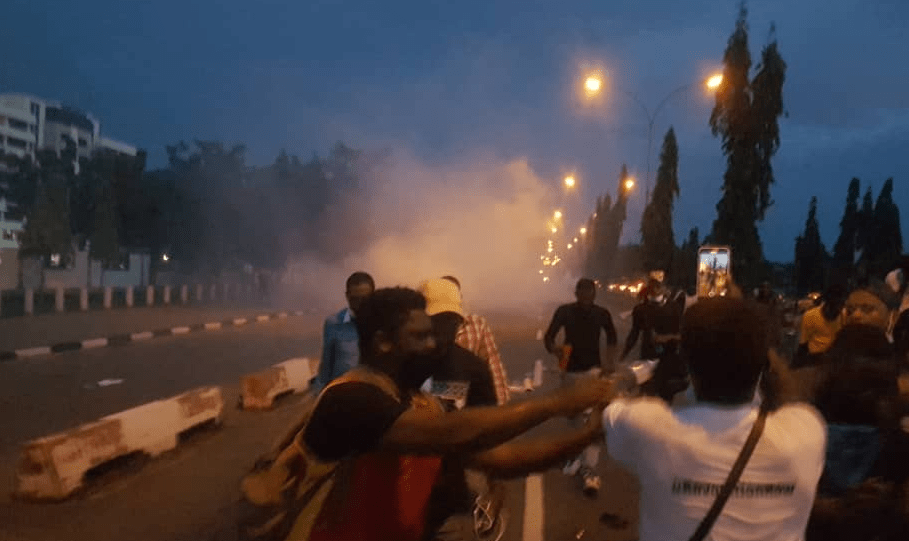 Policemen on Saturday night dispersed with teargas hundreds of #ENDSARS protesters who had gathered at the Force Headquarters in Abuja all day demanding to see Police Inspector General Mohammed Adamu.

The protesters had rebuffed attempts by other officers to speak to them.

However, the protest turned bloody in Ogbomoso, Oyo State, following a clash between the police and the protesters.

A civilian was confirmed shot dead during the clash.

The police denied killing anyone.

The police, having apparently run out of patience with the Abuja protesters who insisted on seeing Adamu or no one else, decided to disperse the unwanted guests.

The protesters had planned to keep the night outside the Force Headquarters while some had even gone there with food and drinks to sustain them.

But when the police struck, the protesters took to their heels.

The siege came 24 hours after President Muhammadu Buhari met Adamu and directed him to bring to justice any officer involved in abusing any citizen.

He appealed for “patience and calm, even as Nigerians freely exercise their right to peacefully make their views known.”

Protesters in Lagos and Ikorodu also took to the streets, blocking roads for hours.

The situation created traffic chaos in parts of the state.

The Secretariat Bus-Stop, close to the old toll gate on the Lagos/Ibadan Expressway, was particularly affected.

The campaign yesterday received the backing of Zahra, daughter of President Buhari, and Kiki, daughter of Vice President Yemi Osinbajo, both of who went on the social media to express their solidarity.

They both called for an end to police brutality.

In England, British-Nigerian actor, John Boyega, said nothing had changed since the police authorities promised to reform SARS three years ago.

“Three years ago, Nigeria’s police chief re-organised SARS after public condemnation about the violence that came with their operations. That change has done nothing for Nigerians, and today, many are still in danger. #EndSarsProtests,” he said.

Television personality, Piers Morgan, was also on Twitter to react to a video by Amnesty International portraying rights violations carried out by SARS.

He said: “This is appalling. The disgusting police brutality in Nigeria must stop.”

Governor Seyi Makinde of Oyo State last night confirmed the death of one Jimoh Isiaka during the #EndSARS protest in Ogbomosho earlier in the day.

Seven other persons were seriously injured during the protest, which he described as highly regrettable.

Makinde, who is currently in Ondo State in his capacity as the Chairman of the PDP campaign organisation for the governorship election in that state, said he had contacted Police Commissioner Nwachukwu Enwonwu about the matter.

He prayed for the repose of the soul of the deceased and for God to grant his parents the fortitude to bear the loss.

The governor promised to pay a personal visit to the family of the late Jimoh Isiaka and pursue the investigation into the matter to a logical conclusion.

While calling for calm on the part of the people, the governor appealed to the police to allow the residents protest peacefully without fear of being assaulted.

He said: “The ENDSARS protests are a strong indicator of a systemic failure. It is a failure on the part of those who have been constitutionally empowered to protect the citizens.

“It again calls into question why state governors are called chief security officers of their states whereas they do not have the necessary powers to control the police force.

We killed no one in Ogbomosho, say police

Spokesman of the command, Olugbenga Fadeyi, said that contrary to general belief, the police “allowed the protesters to express their feelings during the protest, and they were not hindered in any form until they started throwing stones into the police premises and attempted to gain entry into the premises.

“The Police in turn used tear gas to stop them from gaining entry into the Owode/Ogbomosho Area Command/Police Station and preventing them from attacking the station.

“The Police did not fire a shot or kill any protester as widely circulated.

“The CP in his earlier press release had sought for collaborations of parents/guardian, religious and community leaders, leaders of thought, etc to wade in and appeal to these angry youths to exercise patience, give the police high command some time to properly reform SARS.

“He has equally warned social miscreants/disgruntled elements to steer clear of the state as the police in Oyo State will not fold their arms and allow a breakdown of law and order, while he assured the good people of Oyo State to go about their lawful businesses without fear of molestation from any quarters.”

An eyewitness said the protest turned violent when the police started firing live bullets to disperse protesters who had earlier visited the palace of the Soun of Ogbomosho before heading to the Area Police Command, Owode where the incident occurred.

About 80 per cent of the youths who participated in the protest were said to be students of LAUTECH.

Another source said a student simply identified as Gbohunmi was also shot but did not die.

He explained that trouble started when hoodlums, suspected Yahoo boys and cultists hijacked the protest from the organizers, seeing it as an opportunity to invade the police station and free some detainees and suspected criminals.

Youth and Sports Development Minister, Sunday Dare, who hails from Ogbomosho, expressed worries over the tear-gassing of protesters demanding an end to SARS.

The minister, who reportedly worked the phone lines to speak with the Area Commander, also demanded full protection for the protesting youths.

Dare requested a comprehensive police report on the situation.

The university authorities were said to have met and extracted an undertaking that the police would not confront the protesters.

Scores of youth stormed the palace of the Oluwo of Iwo, Osun State, Oba Abdulrasheed Akanbi, yesterday, demanding an end to brutality and extortion by officials of the Special Anti-Robbery Squad (SARS).

That was 24 hours after the clash between the police and youths on the second day of the protests.

Subsequently, the governor of Osun State, Mr Adegboyega Oyetola, appealed to the citizens of the state to exercise restraints in the face of the protests against police brutality in the country, adding that the government was already responding to the people’s outcry.

The Iwo protesters converged on Baptist High School, Adeleke in the community around 10 am, from where they proceeded to the palace of the traditional ruler and the police station at Adeleke area.

The Nation learnt that an aide of the monarch addressed the youth, assuring them that the Oluwo would try his best to ensure that he conveyed their messages to the appropriate authorities on the need to curb the brutality and extortion.

Oyetola, speaking through the Information and Civic Orientation commissioner, Mrs Funke Egbemode, on Saturday, advised citizens not to take the law into their hands, considering that Osun is a peaceful state and President Buhari had promised reforms in the Force and given directives to the Inspector-General of Police to wade into the situation immediately.

The association warned that the protests were on the verge of being hijacked by hoodlums, expressing the concern that the campaign currently going on in the country could develop into full blown chaos if caution was not applied.

The students’ body’s National Public Relations Officer (PRO), Comrade Adeyemi Azeez, told The Nation in Abeokuta, the Ogun State capital, that the protests had already been hijacked by hoodlums who could take advantage of the precarious situation to visit havoc on law abiding citizens.

Azeez said although the activities of SARS and the entire Police Force should be reformed for optimal performance, utmost caution should be taken lest the country is set on fire.

He said: “Information at our disposal revealed that some hoodlums are planning to hijack the nationwide protest in a bid to cause chaos and throw the country into crisis.

“We are also aware that some internet fraudsters, in a bid to continue perpetrating their criminal acts, are mobilising hoodlums to protest against the activities of SARS who have been clamping down on them.

“We want to call the attention of the Inspector-General of Police (IGP), Mohammed Adamu, to the plans of these hoodlums and their devilish plans.

“It is important that the IGP had ordered the ban of SARS and other tactical units on Nigerian roads. The IGP ordered that men of the FSARS should no longer conduct checks, neither should they mount road blocks, but the people behind these protests are not satisfied with this.

“The police should not hesitate to arrest and prosecute anyone caught disturbing the peace of the public or causing violence all in the name of protest.