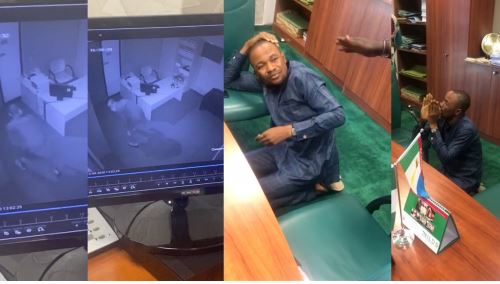 Lawal, who was apprehended with the aid of a closed-circuit television camera, hails from Offa, Kwara State.

In what will come across as a rather startling development, one Kabir Muhammed Lawal, who happens to be the Legislative Assistant to a member of the House of Representatives, Mustafa Saidu from Adamawa State, has been caught burgling an office.

The man was on Friday, caught breaking into the office of another lawmaker from Kano State, Kabiru Idris, The PUNCH reports.

Our correspondent obtained a copy of the CCTV footage showing Lawal allegedly opening a shelf in the office as well as videos of his interrogation by Idris and some sergeants-at-arms.

According to eyewitnesses, Lawal had allegedly paraded himself as a journalist in the course of extorting money from unsuspecting politicians and visitors from Federal Government Ministries, Departments and Agencies.

Authorities of the National Assembly were still interrogating Lawal as of 6.18pm on Friday when this report was filed.

Idris, who is Chairman of the House Committee on Civil Society Organisations and Donor Agencies, in his brief comment on the incident, stated that Lawal allegedly broke into his office after using several keys, within 15 minutes of exiting the office.

The lawmaker said, “He put off the light in my office but my cameras were on and I could see him. He used different keys. I could see from the camera; he was struggling to open the door and it was less than 15 minutes after I closed from the office. Basically, he was monitoring my movements. We have all the videos.”

Idris said he had contacted Lawal’s boss, who was expected to arrive in the National Assembly to see what his aide had allegedly done.

“The Chairman of the Press (House Committee on Media and Public Affairs, Benjamin Kalu) is with us; his office was also burgled a while ago. We have all been burgled; we don’t know what is happening.”

Idris later told journalists that the case had been handed over to the National Assembly management for further action.

Burglars had in May broken into Kalu’s office and carted away cash and items.

Kalu had lamented the spate of insecurity in and around the National Assembly Complex as burglars broke into his office.

The House spokesman said members of the National Assembly were no longer safe to carry out their legislative duties and that he was shocked to see that his office had been burgled.

When contacted, the Divisional Police Officer, National Assembly Division, DSP Abdullahi Sambo, said, “See me on Monday for that.”

Lawal’s boss could not be reached as of press time on Friday as he did not pick up his mobile phone when he was called several times.