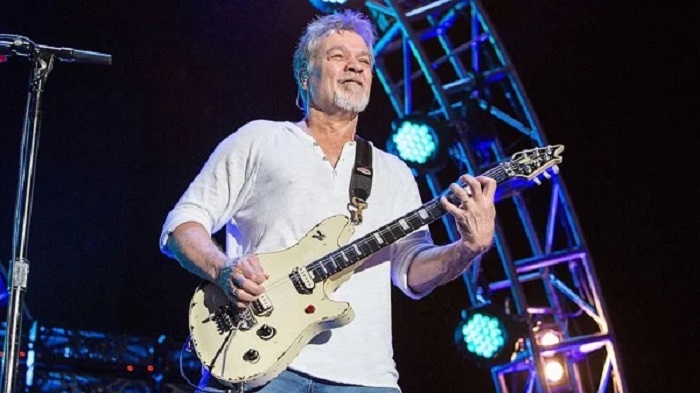 Guitar legend Eddie Van Halen died on Tuesday following a “long and arduous battle with cancer”, his family has confirmed. He was 65.

“He was the best father I could ask for. Every moment I’ve shared with him on and off stage was a gift.

“My heart is broken and I don’t think I’ll ever fully recover,” he wrote.

Born in 1955 Amsterdam, in the Netherlands, Van Halen and his family relocated to California when he was just six. He and his brother, Alex, both learned the piano from a young age but switched to guitar and drums in their teens.

In 1972, alongside vocalist David Lee Roth and bassist Michael Anthony, the two brothers founded what would later be known as Van Halen, which quickly established itself as a staple of the Californian rock scene.

Eddie’s guitar virtuoso whose blinding speed, control and innovation propelled the band into one of hard rock’s biggest groups. It also fueled the unmistakable fiery solo in Michael Jackson’s hit “Beat It”.

“Eddie put the smile back in rock guitar, at a time when it was all getting a bit brooding. He also scared the hell out of a million guitarists around the world, because he was so damn good. And original,” Joe Satriani, a fellow virtuoso, told Billboard in 2015.

READ  Onitsha fire: We’ve not seen Obiano since our goods were destroyed – Traders

For much of his career, Eddie Van Halen wrote and experimented with sounds while drunk or high or both. He revealed that he would stay in his hotel room drinking vodka and snorting cocaine while playing into a tape recorder. (Hagar’s 2011 autobiography “Red: My Uncensored Life in Rock” portrays Eddie as a violent, booze-addled vampire, living inside a garbage-strewn house.)

“I didn’t drink to party,” Van Halen told Billboard. “Alcohol and cocaine were private things to me. I would use them for work. The blow keeps you awake and the alcohol lowers your inhibitions. I’m sure there were musical things I would not have attempted were I not in that mental state.”

Van Halen is among the top 20 best-selling artists of all time and the band was inducted into the Rock and Roll Hall of Fame in 2007. Rolling Stone magazine put Eddie Van Halen at No. 8 in its list of the 100 greatest guitarists.

Tributes quickly started pouring in on social media with Nickelback writing: “The world lost an icon, an innovator, showman, virtuoso, master songwriter and perhaps one of the biggest inspirations ever to learn how to play guitar.”

“Eddie was such a great guitarist and I remember how big Van Halen was, especially her in L.A. Love and Mercy to his family,” he added.

“One of the nicest, down to earth man I have ever met and toured with. A true gent and true genius,” he wrote.