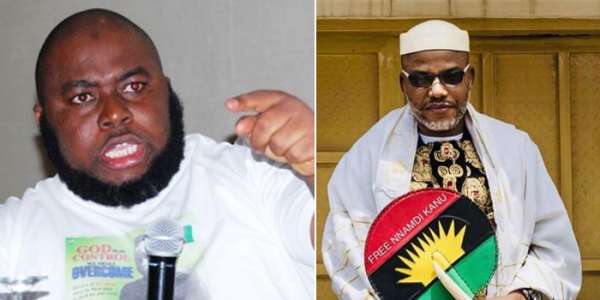 A leading Niger Delta activist, Asari Dokubo has said with Nnamdi Kanu in charge, attaining Biafra will not be possible.

Founder of the Niger Delta Peoples Volunteer Force, Mujahid Asari-Dokubo, has expressed regret for supporting the leader of the Indigenous People of Biafra, Nnamdi Kanu.

According to Vanguard, Dokunbo claimed Kanu has derailed the Biafran struggle.

The agitatir, who said he’s a Biafran and believes in its struggle, maintained that the IPOB leader was not in any struggle for the restoration of Biafra.

Dokunbo said, “It gives me regret that in my life I ever associated with a person called Nnamdi Kanu. That when he was in crisis, I came out to defend him. In fact, my greatest regret is associating with Nnamdi Kanu. I can’t make peace with somebody like him. It’s a foreclosed issue because he has nothing to offer other than to derail our struggle.

“With Nnamdi Kanu, there’s no hope for Biafra. Those of us who get close to him know he’s not fighting for any Biafra. Nnamdi Kanu is just one individual in Biafra, so, we shouldn’t make him important, he’s not. He’s just like everyone one of us.

“He’s not in any struggle. Whatever spell he has cast on the Igbo will be removed very soon and their eyes will open. When he was in trouble, all of us came out to defend him because an injury to one is an injury to all. We risked our lives by speaking in support of him, for him to be released from prison and for him not to be killed.

READ  A second lockdown would be ‘a bloodbath’ warns employers’ federation

“Now, he sees those of us who fought on his behalf for his freedom as his followers. Some of us regret ever lending our voice. We would have left him to rot in jail because he’s caused more harm to Biafra struggle than anyone else.”

When asked how Kanu has caused more harm than good to the Biafra struggle, the former President of the Ijaw Youth Council said, “Listen to him! Don’t you listen to his broadcast? His insults to every Igbo person that disagrees with him? He has also extended his insults to other tribes including the Ijaw people.

“How can you bring unity to the people by abusing and attacking their leaders? Is Biafra struggle an Igbo struggle? He’s making it an Igbo struggle. The Biafra Nnamdi Kanu is pursuing will be worse than Southern Sudan if he wants to promote Igbo hegemony over and above Ijaw hegemony, Ibibio hegemony, and so on.”