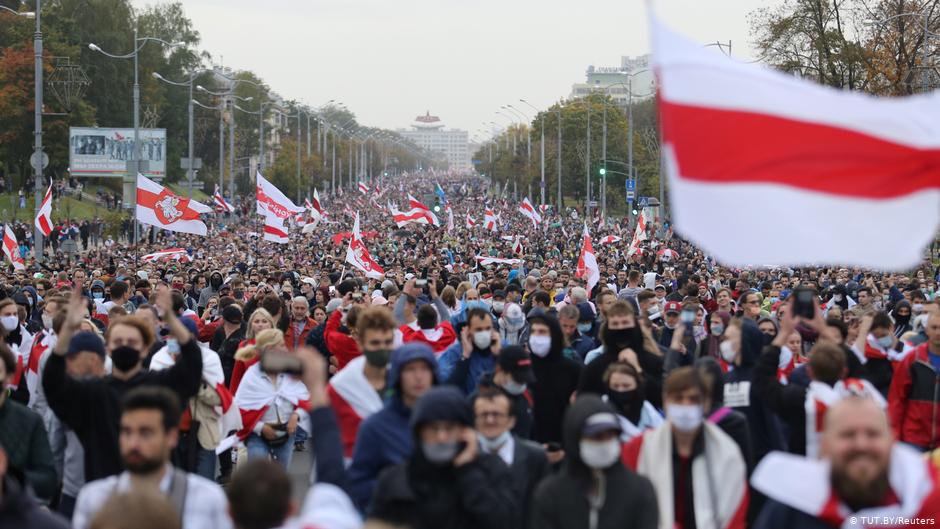 Belarusian police have used a water cannon mounted on an armoured police vehicle to disperse protesters who took to the streets of the capital Minsk on Sunday, Interfax news agency reported and videos posted in social media showed.

Thousands of people gathered in Minsk on Sunday to call on authorities to free political prisoners. The opposition movement calling for an end to Lukashenko’s rule has kept up a wave of large-scale demonstrations since his controversial election win on August 9, with around 100,000 or more people taking to the streets every Sunday.

Ahead of the latest demonstration the top opposition Telegram channel, Nexta Live – which has coordinated protesters and has more than two million subscribers – urged Belarusians to stage a march in support of “political prisoners.”

“The authorities have taken these people hostage,” it said. “We have not forgotten them and demand freedom for all political prisoners!”

According to the Viasna rights group, there are now 77 “political prisoners” in Belarus including opposition blogger Sergei Tikhanovsky, who was not allowed to run for president, and opposition leader Maria Kolesnikova, who ripped up her passport to prevent authorities from deporting her.

Also on the list is Belarusian-US strategist Vitali Shkliarov, who has worked on US Senator Bernie Sanders’s presidential campaign and advised the Russian opposition. He was arrested in late July as he arrived to see his elderly parents.

READ  UPDATE: ‘They Thought I Was A Mad Woman’ – Pregnant Lady Beaten By Nurses In Calabar

On Friday, the United States and the EU hit Belarus with long-awaited sanctions for rigging the vote and orchestrating the crackdown on protesters, targeting key officials — but not Lukashenko himself.

Minsk swiftly announced tit-for-tat “counter sanctions” against the EU, although it was not clear what form these would take or what or who they would target.

Earlier this week Belarusian authorities withdrew the accreditation of all foreign journalists.

Over the past weeks the interior ministry has used water cannon, stun grenades and rubber bullets against peaceful protesters and detained thousands of people, many of whom complained of torture and abuse in custody. Several people have died in the crackdown.

After the blogger Tikhanovsky was jailed, his wife Svetlana Tikhanovskaya ran in his place and claimed victory over Lukashenko.

Since taking refuge in the EU member state Lithuania, the 38-year-old political novice has been engaged in a diplomatic push to drum up support for the embattled Belarusian opposition.

She has already met French President Emmanuel Macron and will travel to Germany for a meeting with Chancellor Angela Merkel on Tuesday.

Student Dmitry Demeshkevich, who planned to take to the streets on Sunday, told AFP he was aware of the sanctions and Tikhanovskaya’s upcoming talks with Merkel.

He said the sanctions were a gesture of support but “nothing more” as it was not clear if the Western punitive measures including travel bans would work.

“It’s better to begin talks with Lukashenko over his exit,” he continued. “Europe can be a mediator but it’s us who should get him to quit.”

Lukashenko, who has ruled ex-Soviet Belarus for 26 years, has accused Western countries and NATO of supporting protesters and trying to destabilise the country.

He put his military on high alert after the vote and Belarus this month will host war games with several other ex-Soviet countries including Russia in what is being touted as a show of force against NATO.