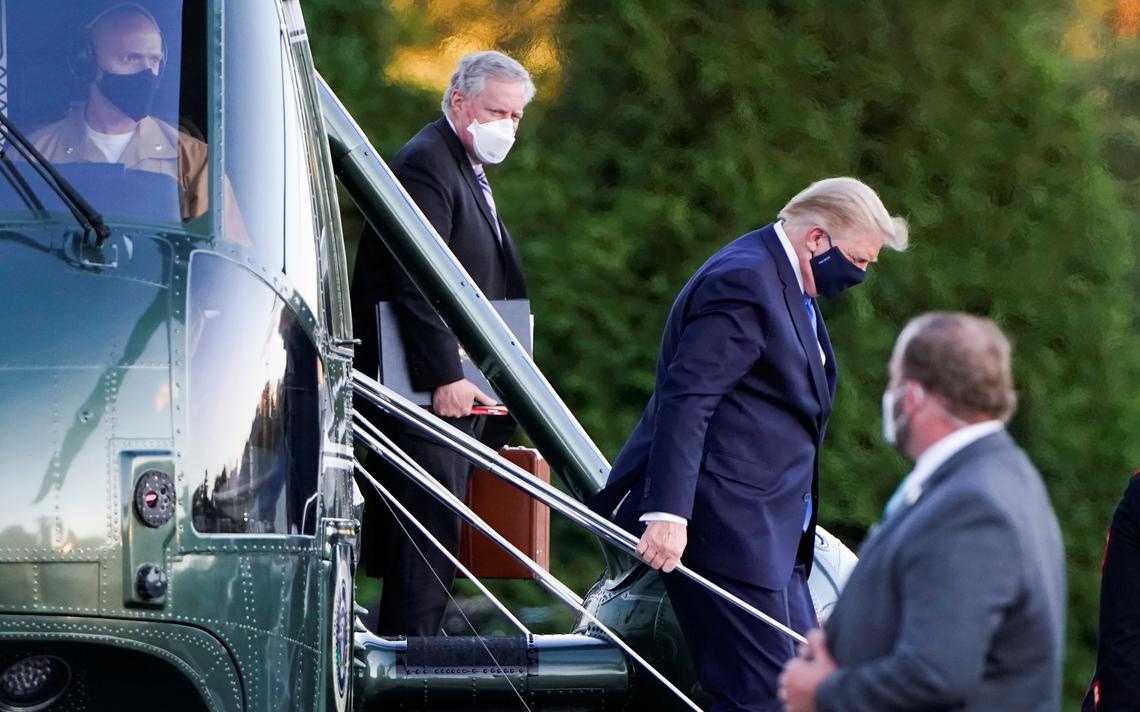 US President Donald Trump was transferred to the Walter Reed National Military Medical Center in Bethesda, Maryland on Friday after he and First Lady Melania Trump tested positive for Covid-19.

Trump’s positive coronavirus test has undermined his repeated claims that the US is “rounding the turn” in its handling of the pandemic, with just one month to go before the November 3 election.

Trump announced earlier on Friday that both he and the first lady had tested positive for Covid-19 and were going to quarantine at the White House.

“Tonight, @FLOTUS and I tested positive for COVID-19. We will begin our quarantine and recovery process immediately. We will get through this TOGETHER,” he wrote on Twitter.

Tonight, @FLOTUS and I tested positive for COVID-19. We will begin our quarantine and recovery process immediately. We will get through this TOGETHER!

But the situation changed later on Friday when he was air-lifted in the presidential helicopter, Marine One, to Walter Reed National Military Medical Center in nearby Bethesda, Maryland.

Trump also tweeted a short video announcing his plans to go to Walter Reed and thanking his supporters.

Hours later, Trump posted a brief message on Twitter that gave no details on his condition. “Going well, I think! Thank you all. LOVE!” he said.

White House physician, Sean Conley, said his medical team has “elected to initiate remdesivir therapy” for the president, who was “doing very well” and did not require “any supplemental oxygen.”

READ  30 Killed: Video Of Buhari In Maiduguri To Sympathize With Boko Haram Victims

Remdesivir drug maker, Regeneron Pharmaceuticals Inc., said the company agreed to supply a single dose, given through an IV, for Trump at the request of his physician under “compassionate use” provisions, when an experimental medicine is provided on a case-by-case emergency basis, while studies of it continue.

Trump will work in a special suite at the hospital for the next few days as a precautionary measure, White House press secretary Kayleigh McEnany said. Online video showed a small group of Trump supporters outside Walter Reed late on Friday waving Trump 2020 flags, most not wearing masks.

Several administration officials pointed to the Saturday Rose Garden announcement of Trump’s nomination of Judge Amy Coney Barrett to the Supreme Court as the possible connection between the recent cases that spanned Washington. Former White House counselor Kellyanne Conway, the president of the University of Notre Dame, and at least two Republican lawmakers – Senator Mike Lee and Senator Thom Tillis who were also present at the event announced Friday they had tested positive and were isolating.

Trump is 74 years old and clinically obese, putting him at a higher risk of complications from the virus.

His diagnosis raised questions as his campaign enters its final stretch.

“It is unclear exactly what that means for a president of the United States —especially for this one, who has spent months not wanting to wear a face mask, not wanting to take physical distancing seriously,” David Smith, chief of the Guardian newspaper’s Washington bureau, told FRANCE 24.

Whatever form Trump’s campaign takes in the coming days and weeks, his diagnosis has seriously undermined his attempts to downplay the pandemic and refocus the race on other issues.

In the past, Trump has wrongfully predicted that the coronavirus “is going to disappear” and even questioned scientists who contradicted his assertions in public.

‘This could be a really significant blow’

Trump has also largely ignored his own government’s public health guidelines, refusing to wear a mask or observe social distancing.

At the first presidential debate in Cleveland, Ohio, earlier this week, Trump even mocked his Democratic challenger, Joe Biden, for his mask.

“Every time you see him, he’s got a mask,” Trump said of his opponent. “He could be speaking 200 feet away … And he shows up with the biggest mask I’ve ever seen.”

With a number of polls showing that a majority of Americans disapprove Trump’s handling of the pandemic — which has claimed more than 207,000 lives in the United States — his diagnosis will likely only fuel his critics.

“This was a day many people feared, many people saw coming, many people thought may well happen — because he was continuing to hold campaign rallies, a couple of them indoors. He was defying often his own public health guidelines on the coronavirus,” Smith said.

Trump’s positive test result certainly complicates his ability to effectively campaign against Biden, who is currently leading in most polls.

“We’ve seen Trump really thrives off the energy of crowds, of holding big events. It gives him a sense of momentum,” Smith said. “This could be a really significant blow to a presidential campaign that is already struggling with Joe Biden well ahead in the polls.”

It is also unclear how Trump’s positive test will affect arrangements for the second presidential debate, which is scheduled for October 15 in Miami, Florida.