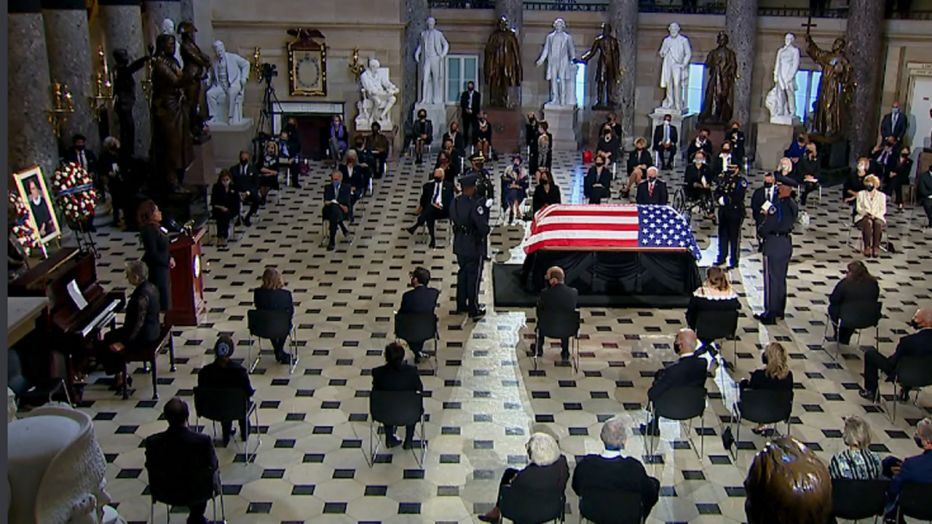 Former US Justice Ruth Bader Ginsburg has become the first woman to lie in state at the US Capitol, a high honour typically reserved for former US presidents and political or military leaders.

The 87-year-old spent 27 years on the US’ highest court where she was known for her defence of anti-discrimination laws and fiery dissents when she thought the court was incorrect.

American political figures including Democratic presidential candidate Joe Biden and members of Congress paid their respects on Friday to Ginsburg. Mourners gathered around her casket at a distance due to the ongoing coronavirus pandemic.

Nancy Pelosi, the Speaker of the US House of Representatives, said it was with “profound sorrow and deep sympathy to the Ginsburg family” that she welcomed the justice to lie in state.

Ginsburg’s casket was lain on the catafalque or raised platform constructed for the casket of former US President Abraham Lincoln, Pelosi said.

The most recent American to lie in state at the Capitol was John Lewis, a civil rights icon and US representative.

Civil rights leader Rosa Parks was the first and only woman to lie in honour at the US Capitol in 2005 – a tribute for non-governmental figures.

US President Donald Trump paid his respects to Ginsburg on Thursday and was booed as he stood before her casket as it lie in repose under the portico of the US Supreme Court.

Trump is set to name her replacement over the weekend, US media have reported, amid a tense election battle over the nomination.

The country’s left-leaning Democratic Party would like to wait until after the upcoming November 3 election before confirming a new justice but Republicans in the Senate say they will not wait and have enough votes to confirm a Trump nominee.