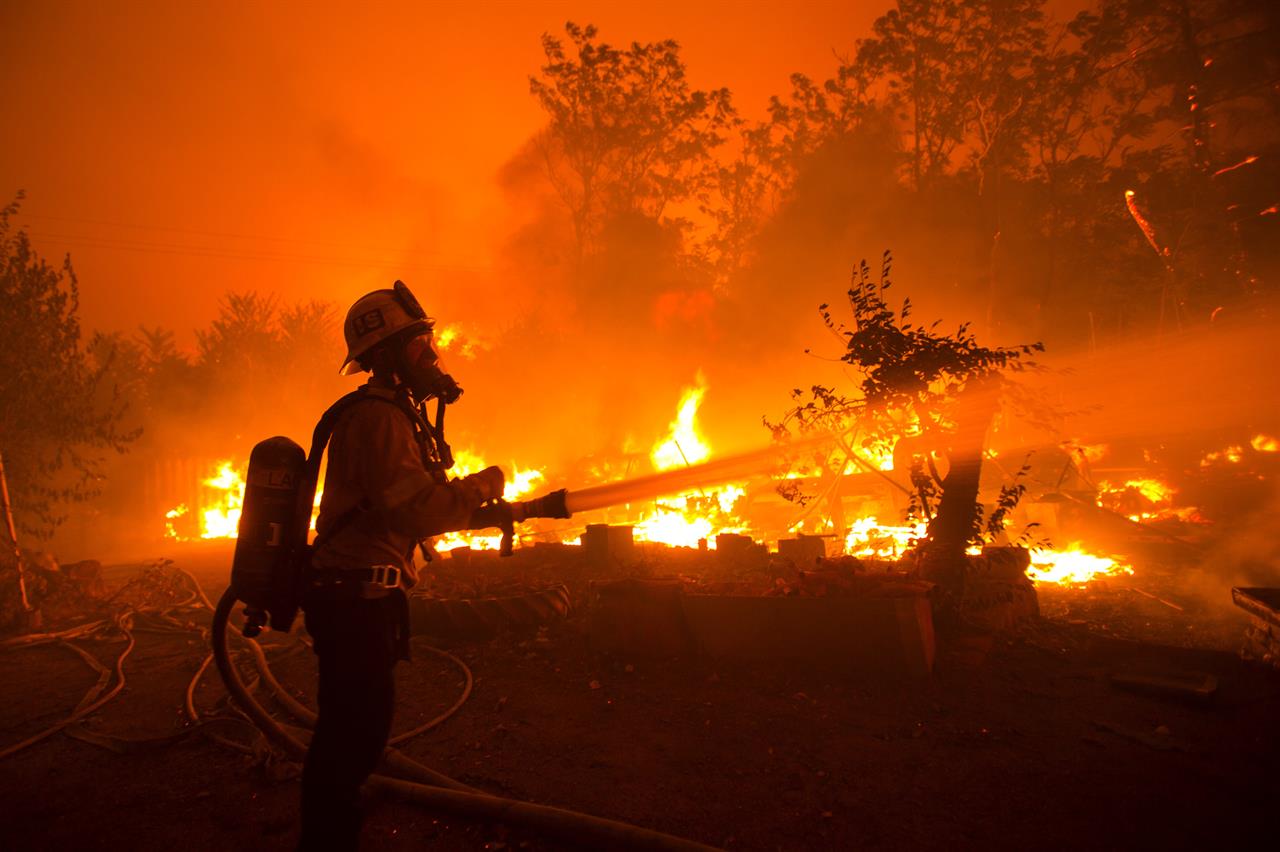 Five weeks after California erupted in deadly wildfires supercharged by record heat and howling winds, crews battling flames pushed on Monday to consolidate their gains as forecasts called for a return of blistering, gusty weather.

California already has lost far more landscape to wildfires this summer than during any previous entire year, with scores of conflagrations – many sparked by catastrophic lightning storms – scorching some 3.4 million acres since mid-August.

The previous record was just under 2 million acres burned in 2018.

As of Monday, more than 19,000 firefighters continued to wage war on 27 major blazes across the state, according to the California Department of Forestry and Fire Protection (CalFire).

The fires, stoked by extreme weather conditions that scientists have pointed to as signs of climate change, have destroyed an estimated 6,100 homes and other structures and killed 26 people, three of them firefighters, CalFire reported.

Another 2 million acres have gone up in flames in Oregon and Washington state during an overlapping outbreak of wildfires that started earlier this month, destroying more than 4,400 structures in all and claiming 10 lives.

But a weekend of intermittently heavy showers across the western Cascade mountain range helped fire crews in the Pacific Northwest tamp down blazes in those two states.

All OSFM task forces mobilized from the OR fire service have returned to their home agencies. During the past 2 weeks the OR Fire Mutual Aid System mobilized 46 state task forces/strike teams from 113 fire agencies, with 300 pieces of fire apparatus & 650 personnel. Thank you! pic.twitter.com/V21cDZDMWB

Although California has seen little or no rain in recent days, bouts of extreme heat and gale-force winds that had produced incendiary conditions for weeks have given way to lower temperatures and lighter breezes, enabling firefighters to gain ground around most fires.

“They’re going to take advantage of this cool weather while they can,” CalFire spokeswoman Lynne Tolmachoff told Reuters.

The break in the weather is not expected to last much longer. Tolmachoff said forecasts call for rising temperatures, lower humidity and a return of strong, erratic winds around mid-week in Southern California and by the weekend across the state’s northern half.

Some fires have proven more stubborn than others. One in particular, dubbed the Bobcat Fire, grew to more than 100,000 acres on Monday in the San Gabriel Mountains north of Los Angeles, with containment levels achieved by firefighters holding steady at just 15%, CalFire said.

The Bobcat last week spread perilously close to a famed astronomical observatory and complex of vital communications towers at the summit of Mount Wilson, while forcing evacuations of communities in the foothills below.

Several more areas, including Pasadena, a city of 140,000 people, remained under an evacuation warning, advising residents to be ready to flee at a moment’s notice. At the opposite end of the sprawling mountain range to the north, the fire was reported to have destroyed some homes and other structures in the high desert of the Antelope Valley.

Across the Bobcat fire zone and others, ground crews with axes, shovels and bulldozers clambered through rugged canyons and mountain slopes, hacking away tinder-dry brush and scrub before it could burn, creating containment lines around the perimeter of advancing flames.

They were assisted by squadrons of water-dropping helicopters and airplane tankers dumping flame retardant on the blazes.

Regardless of the progress they make this week, California’s record fire season remains far from over. The height of wildfire activity historically has run through October. Five of the state’s 20 largest blazes on record have occurred this year.