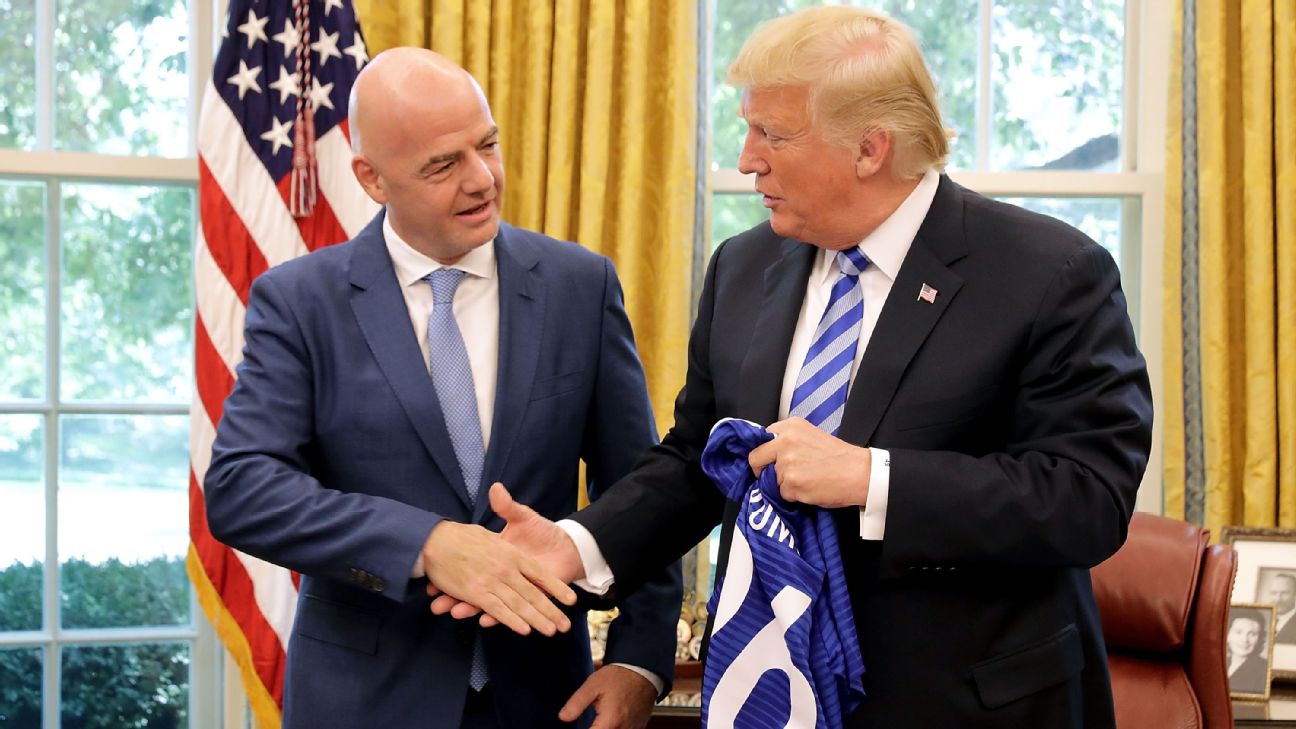 FIFA president Gianni Infantino met President Donald Trump at the White House this week to discuss preparations for the 2026 World Cup in his third visit since the US was named co-host and amid an ongoing probe by the Swiss into corruption allegations in international football.

Infantino also met Trump the following day at the White House, the federation said. It was their first meeting since a special prosecutor in Switzerland opened a criminal proceeding against the FIFA president in July as part of an ongoing investigation into alleged corruption in international football.

Infantino is a suspect in regard to meetings he had with Swiss attorney general Michael Lauber, who has since resigned in the fallout from the case.

The Swiss proceeding relates to Infantino potentially inciting Lauber to commit abuse of public office and breach of official secrecy. Infantino has denied wrongdoing and called the allegations absurd.

Also while in Washington, Infantino spoke with US Attorney General William Barr, FIFA said in a statement.

FIFA President meets US President and US Attorney General – https://t.co/SAEfwjVDk1

Their meeting on Wednesday appeared to seek the effect of normalising the right of FIFA officials to meet prosecutors overseeing investigations of soccer.

“I have had similar meetings in Switzerland, and FIFA’s lawyers are also in regular contact with prosecutors and law enforcement agencies wherever and whenever needed,” Infantino said in the FIFA statement. “In this way, I am fully convinced that the credibility and reputation of FIFA is being restored at the highest level.”

READ  Some Super Eagles Players Do Fetish Things And Have Destroyed A Lot Of Talents - Former Defender, Chidi Nwanu Alleges

The Infantino-Barr meeting at the Department of Justice offices was “using the opportunity to personally thank the US authorities, and especially the DoJ, for their work in the fight against corruption in football,” FIFA said.

More than 40 soccer and marketing officials have been indicted, made guilty pleas or have been convicted in a sprawling US case unsealed in 2015 under the leadership of one of Barr’s predecessors, Loretta Lynch.

The fallout from the American and Swiss cases rocked FIFA and removed a swath of soccer leaders, including its then-president Sepp Blatter. It opened a path for Infantino to win election in February 2016.

Infantino’s visit to the US came ahead of hosting FIFA’s online annual meeting of 211 member federations on Friday. He previously first visited the White House in August 2018 — two months after the US, Canada and Mexico were picked as the 2026 World Cup co-hosts — and again last September.

He and Trump also had lunch together in Davos, Switzerland, in January at this year’s World Economic Forum.

Infantino’s US visit came just after former FIFA secretary general Jerome Valcke and the chairman of Qatar-based media group BeIN Sports, Nasser Al-Khelaifi, went on trial in Switzerland over the awarding of television rights for the World Cup and Confederations Cup.

The 59-year-old Valcke, already banned by FIFA’s ethics committee for 10 years for ethics violations, has been charged with accepting bribes, aggravated criminal mismanagement and falsification of documents.

Al-Khelaifi, who is also president of French champions Paris St Germain and sits on the executive committee of European soccer body UEFA, has been charged with inciting Valcke to commit aggravated criminal mismanagement.

The trial in Switzerland, which is where FIFA is based, began on Monday, September 14, and is expected to last until September 25. Three Swiss federal judges are expected to deliver a verdict by the end of October.

Also on Monday, FIFA and the United Nations Office on Drugs and Crime (UNODC) signed a memorandum of understanding aimed at fighting crime and corruption in sport.

Infantino and UNODC Executive Director Ghada Waly signed the agreement during an event dubbed ‘Tackling Corruption and Crime in and through Sport’ in Vienna where the UNODC is headquartered.

A FIFA press release said the agreement was to foster cooperation to “address threats posed by crime to sport”.

FIFA also said the agreement meant the two bodies would “fight against corruption and crime in and through sport” while also providing a positive influence for youth.

(FRANCE 24 with AP and REUTERS)