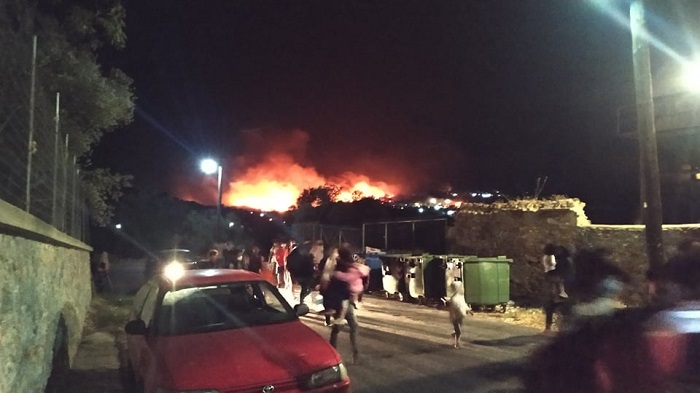 Thousands of migrants fled a camp under COVID-19 lockdown after multiple fires gutted much of the site on the Greek island of Lesbos, authorities said early Wednesday.

Some 12,500 people were living at the Moria camp and the surrounding area, where additional restrictions have been imposed over the past week after a Somali resident tested positive for the coronavirus.

“The fire spread inside and outside of the camp and has destroyed it … There are more than 12,000 migrants being guarded by police on a highway,” Stratos Kytelis, mayor of the island’s main town, Mylinene, told private Skai radio.

“It is a very difficult situation because some of those who are outside will include people who are positive (for the coronavirus).”

There were no reports of injuries.

The fires broke out overnight, police and fire officials on the island told The Associated Press, adding the cause of the blazes, as well as the full extent of the damage, remained unclear. They did not confirm local reports that the fires had been set deliberately in protest at the lockdown measures but said firefighters had “met resistance” from some camp residents.

Health authorities on Tuesday said 35 people had been confirmed infected with the virus so far after a major testing drive was ordered at the overcrowded facility. They were being kept in isolation at a separate site that was not affected by the fire, officials said.

Early Wednesday, riot police were deployed along the highway that connects the camp to Mytilene, some 5 kilometers (3 miles) to the south.

Lesbos was Europe’s busiest crossing point in 2015-16 for illegal migration during a massive westward movement of refugees, many fleeing war in Syria and Iraq and traveling through Turkey. After that wave of migration, Greece set up camps on Lesbos and four other islands, helped with European Union funding, and more recently also set up a network of camps on the mainland.

Firefighters on Lesbos were also battling two other forest fires on the west of the island Wednesday.