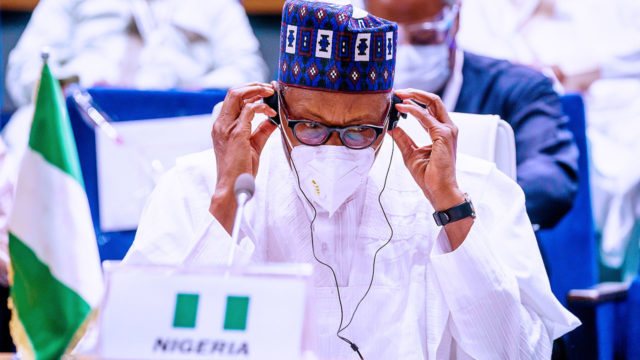 Reactions to the President’s statement came as two power outages temporarily disrupted a joint press conference by three cabinet ministers, who sought to explain reasons why the Federal Government had to remove subsidy and adjust upward the price of electricity.

He said: “There are several negative consequences if the government should resume the business of fixing or subsidizing PMS prices. First of all, it would mean a return to the costly subsidy regime. Today we have 60 per cent fewer revenues, we just cannot afford the cost.’’

According to him, other negative consequences will be the return of fuel queues, and diverting funds for health, education, and other social services to fund subsidy.

Represented by Vice President Yemi Osinbajo at the event, Buhari said the role of his government was to prevent marketers from raising prices arbitrarily or exploiting citizens.

“The other painful adjustment we have had to make in recent days is a review of the electricity tariff regime.

“The recent service-based tariff adjustment by the DisCos has been a source of concern to many of us. Let me say frankly that like many Nigerians, I have been very unhappy about the quality of service given by the Discos. That is why we have directed that tariff adjustments be made only on the basis of guaranteed improvement in service,” he said.

He said only customers with a guarantee of a minimum of 12 hours of power and above could have their tariffs adjusted.

He said a mass metering programme was being undertaken to provide meters for over five million Nigerians, adding that NERC had been instructed to enforce the capping regulation, which would ensure that unmetered customers were not charged beyond the metered customers in their neighbourhood.

He said his government was not insensitive to the condition of Nigerians and had asked the Central Bank of Nigeria (CBN) to create credit facilities of up to N100 billion for healthcare and N1 trillion for the manufacturing sector.

But reacting to the statement yesterday, the Peoples Democratic Party (PDP) warned the Buhari Presidency against pushing Nigerians to the wall through “the display of insensitivity and total disregard to the demands by the citizens to effect an immediate downward review in the pump price of fuel.”

The party described the attempt by the Buhari Presidency to justify the “wicked” increase in the pump price of fuel from N87 per litre under the PDP to N160 as provocative, confrontational and totally unacceptable to Nigerians.”

The PDP, in a statement by its National Publicity Secretary, Kola Ologbondiyan, said the defence of the hike, was in bad taste and should be rescinded immediately.

According to the party, it is unpardonable that “after running a heavily corrupt oil trade and subsidy regime, through which over N14 trillion naira had been allegedly frittered by its officials, the Buhari administration seeks to put the burden of high costs on innocent and already impoverished citizens.”

The party said it rejects “this attempt to hinge the increase in fuel price on presumed removal of oil subsidy when the government failed to account for the proceeds of oil sales in the last five years.

“Our party insists Nigerians should not be made to bear the brunt of the huge corruption in the Buhari administration, which has wrecked every aspect of our national economy.

“It is incredulous and shameful for this administration to predicate the reckless increase in the cost of fuel on a faulty comparison with costs in other countries of the world, whereas, the daily standard of living, the purchasing power and a living wage of the average Nigerian in the last five years cannot be compared with what obtains in those countries,” the statement added.

SOME investors in the energy sector, however, expressed support for the total deregulation of the downstream sector of the nation’s petroleum industry, stressing that payment of subsidy and fixing of prices by the government would affect the sector.

An expert with the Facility for Oil Sector Transparency (FOSTER), Michael Faniran, said there was no alternative to deregulation at this time, stressing that subsidy was one of the causes of the country’s economic woes.

He argued that the total deregulation of the downstream sector would attract investors to build refineries and invest in other segments of the downstream value chain, adding that the price would drop if the country begins to refine crude oil.

Energy Economist and former President of Nigeria Association for Energy Economists (NAEE), Wunmi Iledare, said deregulation was necessary and inevitable to prevent the collapse of the energy sector.

“The temporary bitter pill is like a bitter leaf soup that with time has no bitter taste in the mouth. With perseverance, Nigeria will be better off in the long run if this subsidy gorilla is tamed once and for all,” the professor stated.

While a Professor of Economics at Babcock University, Segun Ajibola, noted that with over N4.7trillion deficit in the 2020 fiscal budget and severe stress on revenue, including oil revenue, the current government has no alternative than to remove the subsidy; the programme coordinator for Nigeria Natural Resource Charter (NNRC), Tengi George-Ikoli, noted that the COVID-19 pandemic revealed the glaring shortcomings within Nigeria’s petroleum sector, especially the waste of funds on subsidy.

“Struggling to recover from the impact of the COVID-19 health crisis and the loss in revenue from the oil price crash, Nigeria can simply not afford to continue paying subsidy.”

MEANWHILE, two consecutive power outages, yesterday, disrupted a joint press conference by three cabinet Ministers who sought to explain reasons why the Federal Government had to remove the fuel subsidy and adjust upward the price of electricity in the country.

At the briefing attended by the Minister of Information and Culture, Alhaji Lai Mohammed; Minister of State, Petroleum, Timipre Sylva; and Minister of Power, Mamman Saleh, Mohammed said the Federal Government had so far spent a total of N10.413 trillion on fuel subsidy from 2006 to 2019 and additional N1. 7 trillion on power shortfalls.

He said the long-drawn fuel subsidy regime ended in March 2020, when the Petroleum Products Pricing Regulatory Agency (PPPRA) announced it had begun fuel price modulation, in accordance with prevailing market dynamics, and would respond appropriately to any further oil market development.

He said that in spite of the recent increase in the price of fuel to N162 per litre, Nigeria’s remained the lowest in the West/Central African sub-regions.

On the recent upward electricity tariff adjustment by distribution companies, or DisCos, Mohammed said the government had been supporting the industry.

To protect Nigerians who could not afford the cost, the industry regulator, NERC, had approved that tariff adjustments be made but only on the basis of guaranteed improvement in service.

The minister also said that despite the recent tariff review, the cost of electricity in Nigeria remained cheap or compared favourably with that of many countries in Africa.