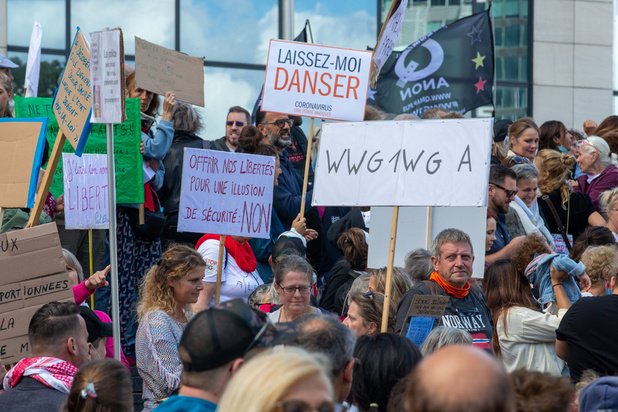 Several people were fined and two arrested at a demonstration against coronavirus measures in Brussels which saw hundreds forego the mandatory use of masks and flout social-distance rules at the weekend.

Around 350 people gathered at the foot of the Finance Tower in Brussels’ Northern Quarter, many without face masks and brandishing protest signs against the government’s measures to contain the pandemic.

While the maximum number of people allowed to gather outdoors is at 400, police said the participants were not respecting social distance rules.

“We gave them several warnings,” police spokesperson Olivier Slosse told Le Vif. “We repeated numerous times that the rules had to be respected, meaning the use of face mask and social distancing.”

“But the refusal was evident, so we put an end to the demonstration,” he added, with the police’s Twitter account noting that offenders had been given fines.

Additionally, two people were detained and one is facing potential charges after police said the detainee punched a police officer in the face.

The demonstration, which saw people brandish signs reading ‘let me breathe’ or ‘live your life, the epidemic is over,’ was organised by the anti-coronavirus measures group Viruswaanzin/Folievirus.

The group, which is seeking to pressure governments to roll back the measures they see as harmful to their liberty, has already demonstrated once and is namely taking Belgium, several epidemiologists and Bill Gates to court over the pandemic.