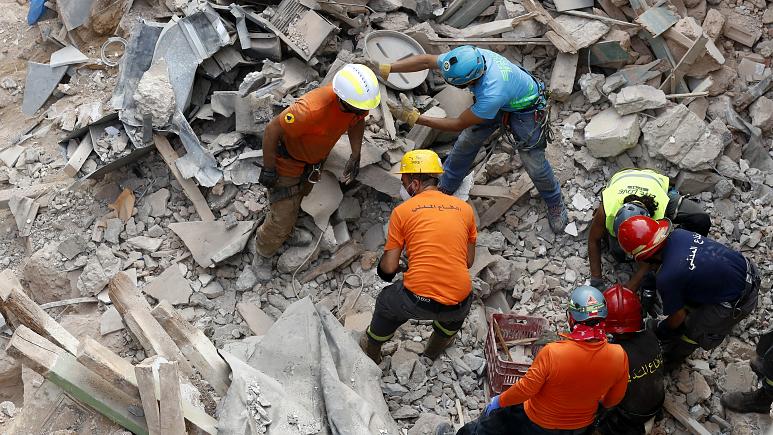 Rescuers on Saturday morning continued digging through the rubble of a building in Beirut after sensors detected possible signs of life, despite hopes of finding anyone fading.

“The search has been ongoing since the day before yesterday, but the chances (of finding someone) are very low”, the director of operations for the Lebanese Civil Defence, George Abou Moussa, told AFP.

“We haven’t anything so far,” he added.

Walter Munoz, a Chilean rescue worker, told journalists on the ground that the hope of finding a survivor was 2%.

The search operation in the historic Mar Mikhail district — on a street once filled with crowded bars and restaurants — has gripped the nation.

The possibility, however unlikely, that a survivor could be found after one month gave hope to people who followed the live images on television, wishing for a miracle.

The operation began Thursday after a dog used by the Chilean search-and-rescue team TOPOS detected something as it toured Gemmayzeh and Mar Mikhail streets and rushed toward the rubble.

Rescue workers used cranes, shovels and their bare hands in a meticulous search after a pulsing signal was detected.

Saturday’s operation focussed on searching the ruins of the building’s stairwell, Qassem Khater, a civil defence rescuer on the ground, told AFP.

“We will not leave the site until we have finished searching under the rubble, even if the building looks like it might collapse,” he added.

Beirut on Friday marked a month since the explosion, which saw almost 200 lose their lives and thousands injured, with a minute’s silence on Friday.

Soldiers fired a salute, then laid a white rose for each of the 191 victims at a memorial. The crowd fell silent at 6.08 pm, the moment of the most destructive explosion in Lebanon’s violent history.

Church bells tolled, mosques made a call for prayers and ambulances blared their sirens simultaneously.

Some people held ropes tied as nooses — a sign of the grief and anger toward officials that persists in the country.

The blast was caused by nearly 3,000 tons of ammonium nitrate that had been improperly stored at the port for years.

In addition to the dead and injured, thousands of homes were damaged by the blast, which smashed windows and doors for kilometres and was felt on the Mediterranean island of Cyprus.

It still isn’t clear what caused the fire that ignited the ammonium nitrate. The public blames the corruption and negligence of Lebanon’s politicians, security and judicial officials, many of whom knew about the storage of the chemicals and did nothing.

“We will hold you accountable,” one banner read. A firefighting force drove from headquarters in the direction of the port, marking the route that 10 of their colleagues took when they rushed to put out the fire but were killed instead.