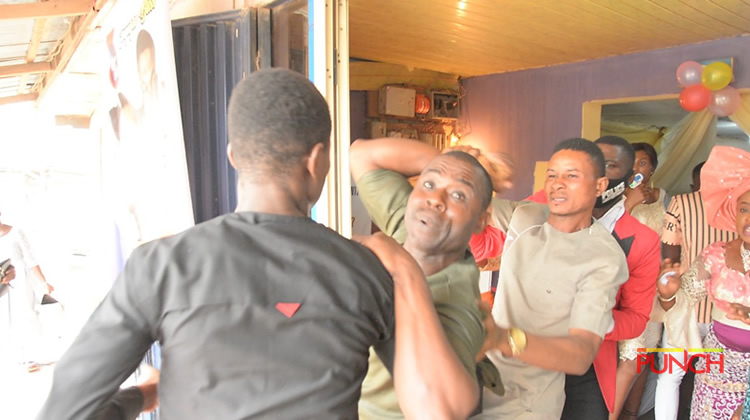 A man who stormed a wedding venue and disrupted it has given reasons for his controversial action.

Iberemu Osadebe, the man who disrupted a wedding on Saturday at Great Salvation Christian Center has revealed why he did it.

Recall that the man stormed the venue with his family members, claiming the bride is already married to him.

According to the distraught man, he sold his land to pay for the woman’s brideprice.

Osadebe, arrived the church at Ako Aro Road, in the Ifako-Ijaiye area of Lagos State and created a scene, claiming the bride is his wife.

It was gathered that Osadebe and the bride Gloria have been a couple for 20 years.

They had a son in 2011 after which they had their traditional wedding. However, Osadebe fell sick for about five years, and sold most of his properties, seeking for help.

Osadebe who is said to be a citizen of Imo State, reportedly suffered paralysis, and was said to have travelled to his hometown in Isiala Mbano, to continue the treatment.

According to reports, Osadebe was on his sickbed when information reached him that his wife, Gloria, who is from Edo state, would be getting married to another man on the 29th of August, 2020.

The 43-year-old man returned to Lagos on Friday 28th August, which was a day to the wedding, and reported his plan to disrupt the wedding at the Agbado Police Station, Lagos.

On the day of the wedding, Osadebe stormed the church at about 11am with family members.

However, leaders of the church had already received information that he was planning to disrupt the wedding, so they recognised him and pleaded with him to let the wedding continue but he refused.

Some members of the National Union of Road Transport Workers, NURTW, who were said to be colleagues of the new groom, named Henry, were also invited to the ceremony to mediate.

The wedding ceremony started and went smoothly until the church pastor was about to join the new couple together.

As the pastor was about to make the duo a couple, Osadebe’s family members marched to the pulpit and revealed that the woman was already married to another man and could not be joined in holy matrimony to Henry.

There was chaos in the church, and the church’s security guard bundled pushed them out of the church.

The guards then mounted a defence at the church’s entrance, stopping Osadebe and his family members from entering.

Osadebe and his family members however protested and demanded an end to the ceremony.

Speaking with The Punch, Osadebe narrated how he sold his land to pay Gloria’s bride price. He said that he was a bus driver until he fell sick and went to the village for treatment.

According to Osadebe, when his wife complained to him that they couldn’t feed, he asked that his bus should be sold and the money should be given to his wife to start a business, so she can feed and pay their son’s school fees.

Osadebe said that he was surprised when he heard that his wife was getting married. Though he said that he’s ready to let her go, but on the condition that his son is given to him and the bride price he paid should be refunded.