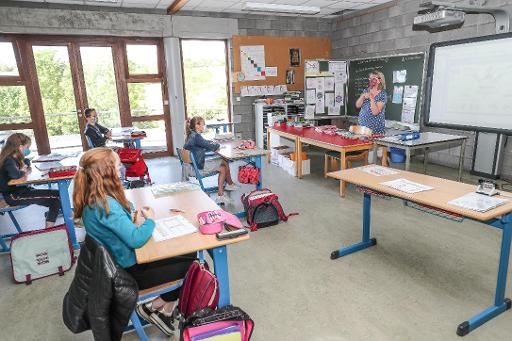 A majority of pupils in Brussels went to class on the first day of school on Tuesday, with staff seeing it as a sign that fears related to the coronavirus are receding among parents.

“We no longer have parents who keep their kids at home out of fear,” Frank Nijs, principal of a school in Haren, in the City of Brussels, told Bruzz.

When primary schools reopened across Belgium on Tuesday, Nijs said that only around a dozen kids were absent, with many of them in quarantine after returning from abroad.

“Some can already come to school [on Wednesday],” he said, adding that some other kids had only made it back to the country and would therefore begin coming to school only by mid-September.

Staff in the Maria Boodschap school, in central Brussels, report that only two pupils were not present on Tuesday, while in a Dutch-speaking primary school in Brussel, only 22 children out of a total of over 300 are absent.

The latter school’s principal said that, in the image of the school in Haren, most absent children were expected to come back to class after completing their quarantines.

At the Vier Winden primary school in Molenbeek, principal Karlien Tiebout said that, with a few exceptions, all students were present.

“The ones who are absent still have to get tested,” Tiebout said.

Under the current schooling scenario, children who return from holidays in a red, or high-risk, destination must get tested and quarantine, while children who come back from an orange zone are not required to do so, but it is highly recommended.