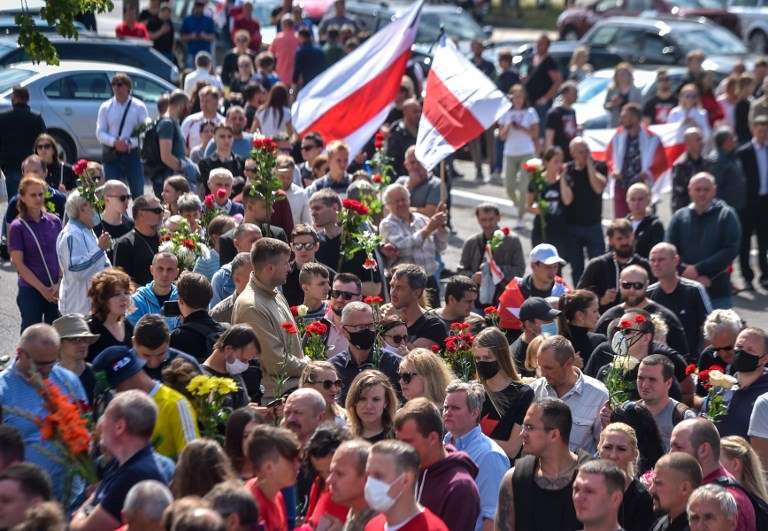 Up to 100 people gathered on Monday evening around 8:00 PM in front of the Belarusian Embassy in Brussels in solidarity with repressed Belarusians protesting against the re-election of President Alexander Lukashenko.

According to official results, Lukashenko won the elections on 9 August with 80% of the votes. In the weeks following the election, demonstrations have been occurring, with tens of thousands of protesters taking to the streets of Minsk, the Belarusian capital, over the last three Sundays.

At the gathering in Brussels, small posters mentioned repressed functions, such as those of journalist, human rights defender or political opponent.

“We consider that we must continue to put pressure on Lukashenko’s regime after 3 weeks of demonstrations, after the fraudulent elections,” said Bartosz Koska, a member of the Solidarity Action Brussels association which organised the vigil.

“We consider that we must support the Belarusian people in this revolution,” Koska added.

The demonstrators were wearing white and red, the colours of Belarus, and many flags were hoisted during the demonstration. In addition, they lit multiple candles as well as the lights of their telephones, and the word “Belarus” was written on the ground with small candles. They sang Belarusian songs and uttered slogans against Lukashenko.

Meanwhile, the Baltic states, members of the EU and NATO, blacklisted Belarusian President Alexander Lukashenko and 29 senior officials of his regime on Monday for alleged electoral fraud and repression of pro-democracy demonstrators. They are thus subject to a travel ban on these territories.

This decision comes in response to the violence and arrests deployed against demonstrators in Belarus.

The European Union had already announced on Friday that it would take sanctions against senior officials of the Belarusian regime.

Lukashenko has been in power in Belarus since 1994.