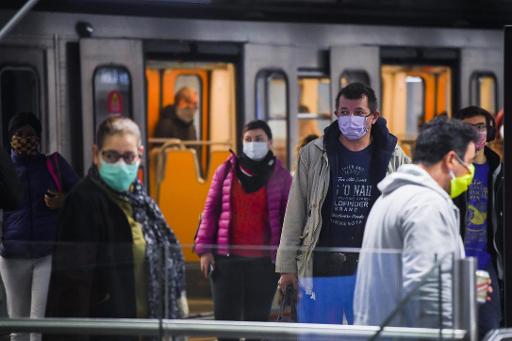 A new study of Brussels public transport has shown a high number of passengers do not properly wear their masks during their journey, prompting concerns from fellow passengers.

About 14% of passengers on public transport in Brussels do not wear their mask correctly, according to a test by news outlet Bruzz, which took tram line 3 from De Brouckère to Esplanade and back on Monday 31 August.

The majority of people seem to wear their mask the way they are supposed to. During the first wave of the coronavirus crisis in the spring, official figures also showed that “most people on Brussels public transport” wore their mask as asked.

Some people, however, wear the mask only over their mouth, leaving their noses exposed, and a couple of people even wore it below their chin.

“It has become a habit,” one male passenger told Bruzz. “A minority does not wear one, or wears it incorrectly, such as under their nose. But most people just wear it without being difficult about it.”

By taking a hidden camera onto the tram, the newspaper counted that of the 97 people that got on and off the tram, 12 wore their masks under their nose, and 2 wore it underneath their chin. No passengers who did not wear a mask at all were spotted.

“If a part of passengers does not wear it, then there is no point. But if everyone does it, we will get through this until there is a vaccine. So we will keep doing it,” a female passenger said.

As schools reopen, STIB will start operating at full capacity again. By offering passengers a normal range of services, STIB hopes to give people more space in its vehicles, which should help when trying to keep sufficient social distance.

At the beginning of August, trade unions asked for stricter enforcement of the face mask obligation on the buses and trams of Flemish transport company De Lijn, as well as undercover checks done by officers in civilian clothes.

On public transport, at stops and in stations, wearing a face mask is mandatory for everyone from 12 years old. People who do not wear them, risk a fine of up to €250.