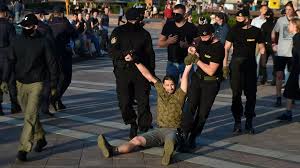 While the protest movement against Lukashenko’s 26-year reign entered its third week, the man known as “Europe’s last dictator” responded with fresh rhetoric and martial imagery.

Most prominently, Nobel Literature Prize winner Svetlana Alexievich was summoned for questioning over her ties to the opposition.

Alexievich, who won the Nobel Prize in 2015, has supported opposition leader Svetlana Tikhanovskaya and is a member of the Coordination Council set up by her allies to oversee a peaceful transition of power, although the 72-year-old writer has not attended its sessions.

The Investigative Committee summoned Alexievich for questioning on Wednesday as a witness in an ongoing criminal probe into the council’s creation, focusing on alleged calls to seize power.

The announcement came hours after police reported the detention of two other Coordination Council members on suspicion of organising illegal strikes.

Meanwhile a top US diplomat met Tikhanovskaya in Lithuania after tens of thousands took part in some of the largest protests in the country’s recent history for a second Sunday in a row.

‘We are under pressure’

Tikhanovskaya fled to neighbouring Lithuania after August 9 polls that she claims to have won against Lukashenko. His insistence on his own landslide victory and police violence against demonstrators have sparked the huge protests against his rule.

The opposition said two members of its Coordination Council were detained on Monday: Sergei Dylevsky, a tractor plant worker who has come to prominence as a strike leader and Olga Kovalkova, a member of Tikhanovskaya’s staff.

Allies of Tikhanovskaya formed the council this month to oversee efforts for a peaceful transition of power.

“We are under pressure. This morning two members of the presidium of the Coordination Council were detained,” another presidium member, Liliya Vlasova, told a press conference.

Vlasova, a lawyer and mediator, said Dylevsky and Kovalkova were accused of illegally organising a strike, an administrative offence.

A mobile phone video by a witness posted by news site Tut.by apparently showed Dylevsky and Kovalkova being led to a police van, watched by uniformed workers from the Belarus tractor plant.

Three more people were arrested Monday evening on the sidelines of an opposition protest in capital Minsk.

“We consider these actions of the authorities are absolutely unlawful,” Vlasova said. “We are negotiators.”

Vlasova said that investigators had also summoned her for questioning later Monday.

In the industrial city of Soligorsk, police detained a strike leader at the Belaruskaly potash plant, Anatoly Bokun, and another, Alexander Lavrinovich, at the MZKT plant, which makes heavy-duty trucks, factory workers told AFP.

He condemned “the violation of human rights and brutality that we’ve seen play out in Belarus,” saying Belarusians must “determine their own future”.

Tikhanovskaya said Lukashenko “does not have the support either of the Belarusian people or the international community”.

Visiting Ukraine, German Foreign Minister Heiko Maas called for Lukashenko “not to resort to violence, to respect the rights of the protesters”.

The Kremlin said President Vladimir Putin had spoken by phone with Lukashenko on Monday, the latest in a series of calls between the two leaders, whose countries are closely linked.

While police did not crack down at the time, the opposition warned Monday that anyone who took part could potentially be detained.

‘Belarus will not waver’

As the vast crowd of protesters held their unsanctioned march through Minsk, Lukashenko mounted a bizarre display of force.

Footage released by his press service showed him landing at his residence in Minsk with his 15-year-old son Nikolai, both in bullet-proof vests and carrying assault rifles. He then praised riot police manning a heavily fortified barricade as “beautiful guys”.

On Monday the presidency and state news agency Belta used the footage in a montage set to stirring music, titled “Belarus will not waver”. It featured scenes of heavily armed riot police and warnings that Lukashenko will impose “order”.

Tikhanovskaya’s campaign ally and Coordination Council member Maria Kolesnikova on Monday called for an official investigation into how Nikolai, a minor, was allowed to carry a combat weapon, and ridiculed Lukashenko.

“If he thinks 80 percent of Belarusians voted for him, why does he fearfully hide behind barbed wire and those chains of ‘beautiful guys’?”