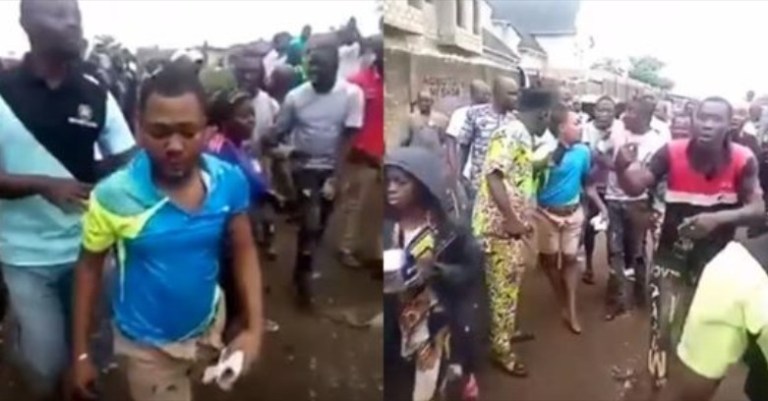 The face of the shop owner identified as Emmanuel Egbu arrested for allegedly eating human faeces with bread in Oyo state has been revealed.

He was arrested by the Oyo State Police Command on Saturday, August 22, 2020.

According to reports, Egbu, who owns a cosmetics shop where he sells Brazilian hair, was caught by some persons at his shop located at Sango Area of Ibadan. He was subsequently paraded by angry mob and his shop looted.

Confirming the arrest, the State Police Public Relations Officer, Mr Olugbenga Fadeyi, said: “The DPO told me that some people rescued the man from those who accused him of eating excreta and bread. They said they found some excreta which he packed inside a nylon bag. He was caught and taken to the police station.

“The DPO has taken over the case and the man is already in custody. He has begun investigation into the case and samples of what was found on him would be sent for laboratory analysis.

“He has taken the man’s statement also, and after the investigation at that level, the case will be sent to the State Criminal investigation Department at Iyaganku for further investigation. Investigation will reveal if he is involved in money ritual or not.” Trader arrested for allegedly eating bread and feaces in Oyo The police in Oyo state have arrested a trader identified as Emmanuel Egbu, for allegedly eating human feaces with bread in his shop situated in the Sango area of Ibadan, the state capital, on Saturday, August 22. Egbu trades in cosmetics and Brazilian hair. Those who caught him with the weird food combination were said to have raised the alarm which attracted a huge crowd. The timely intervention of the police prevented residents from lynching him. The spokesperson of the state police command, Olugbenga Fadeyi, who confirmed his arrest, said the Divisional Police Officer in charge of Sango Police Station had begun an investigation into the incident. He said the faces reportedly found on the suspect has been sent to the laboratory for examination. Meanwhile residents of the area seized the opportunity to loot his shop. Swipe to watch the videos showing when he was apprehended and some looters looting his shop