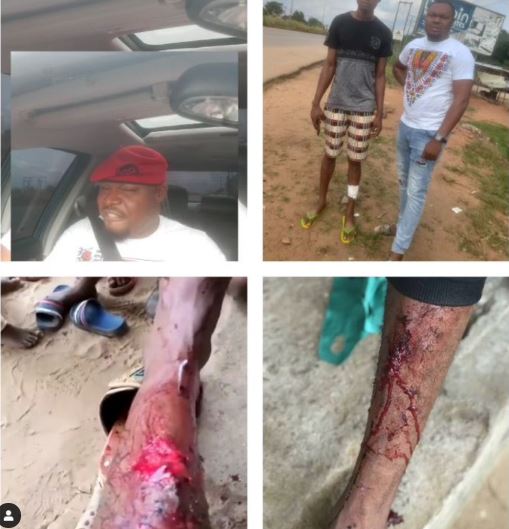 A young man’s leg has been battered by SARS operatives after they allegedly extorted money from him.

A 26-year-old man identified as Samuel has cried out for help after he was on Saturday, August 22,2020, allegedly assaulted and extorted by SARS officers attached to command headquarters in Asaba, Delta State.

It was gathered that the victim was on a motorcycle with his girlfriend when he was accosted by the officers at Koka Junction in the state capital.

According to Activist Gwamnishu, “The SARS officers dragged him from the Okada and forced him and his girlfriend into their car.

The victims demanded to know where they were being taken to but the officers responded by macheting Samuel’s leg.

They seized his ATM card and forced him to disclose his pin and withdrew N15,400 from his account.

I’m calling on the Delta State government to please intervene by putting an end to the constant harassment Nigerians face from SARS.”….

They are back. They pick you up, drive you few kilometres and robbed you like the real Armed robbers. #SarsWithCutlas The Authorities are silent. When we talk, they accused us of promoting crime. No Nigerian deserves to live in fear. We fear Armed Robbers We fear Kidnappers We fear Police who ought to protect lives. @bbirights please Let's set out a date to END this robbery.