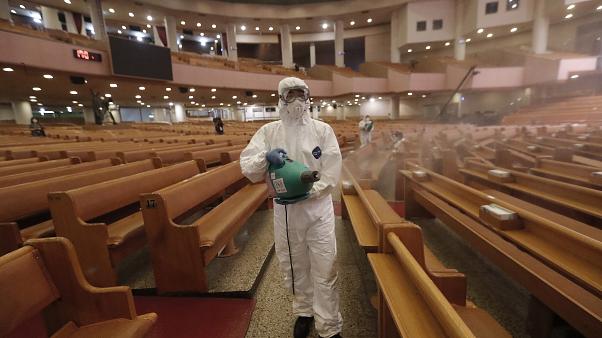 South Korea is banning large gatherings, shutting nightspots and churches and removing fans from professional sports in unprecedented restrictions announced on Saturday to battle the spread of coronavirus.

While most of the new cases came from the densely populated Seoul metropolitan area, which has been at the center of the viral surge in recent weeks, infections were also reported in practically every major city and town, raising concerns that transmissions are slipping out of control.

The government has already imposed elevated social distancing measures in Seoul this week after resisted them for months out of economic concerns.

Churches had been a major source of new cases in the Seoul area before authorities shut them this week.

Nightclubs, karaoke bars, buffet restaurants and computer gaming cafes in the greater capital region have also closed and spectators are banned again from baseball and soccer games, just weeks after teams had been allowed to sell portions of their seats.

The same measures will apply nationwide from Sunday, although Park said local governments will be permitted to exercise some level of flexibility, such as advising business shutdowns rather than enforcing them, if infections are low.