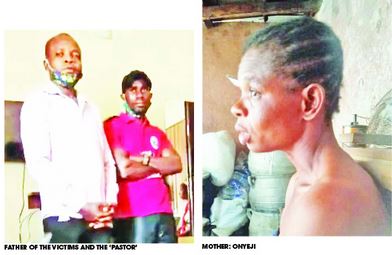 Weeks after the scandal went viral, a young man popularly known as ‘Pastor’ Nduka Anyanwu, who is at the centre of the dirty drama is still in police custody for allegedly raping and impregnating two sisters aged 17 and 13. After weeks of going back and forth on the matter, mother of the victims gave Saturday Sun details of how their once revered man of God tricked her and her husband to have his way with their teenage girls.

When his deeds were uncovered, Anyanwu stated that he wanted the older girl to keep her pregnancy because he wants to marry her but the younger one should abort hers. He revealed that sexually defiling the younger girl was a mistake, which he regrets even though he had carnal knowledge of her many times.

According to reports, Anyanwu is a minister of the gospel at the Lord’s Chosen Church, Canaan land branch, Oshodi, Lagos. He has been sexually defiling the younger girl since she was nine-years-old and the older girl since she was 16 under the pretext that she had a spiritual mark on her body that repels good things and the only way to remove the mark was to have sex with her.

Drama, however, ensued when a team of advocates from Stop The Abuse Foundation and Child Advocates and Vulnerable Person’s Network tried to get him arrested with the help of policemen from Makinde Police Station, Oshodi.

The parents of the victims adamantly resisted the arrest of the alleged rapist because he is a man of God who had already promised to marry their older daughter. In a video that went viral some weeks ago, the mother of the victims was seen trying to stop police officers from arresting Anyanwu even though the female police officer kept pleading with her to allow them do their job.

How my family was deceived –victims’ mother

When Saturday Sun visited the mother of the victims, Mrs. Amaka Onyeji at their one room apartment in Oshodi, Lagos, to get updates on the unfolding matter, she broke down in tears.

A mother of 8, Onyeji told Saturday Sun amidst tears, “It is a really long story and a very painful one. As I’m talking to you now, my heart is broken. I can’t find my daughters. God help me, I haven’t done any evil.”

Onyeji said she had been going round government offices at Alausa to get her children back in her care but all her efforts have been futile.

“I’m just coming back from Alausa now looking for my children. This issue is beyond what I can control because human rights advocates are involved in it. They publicized the matter.” She said she has been visiting her husband in Panti to give him food because he was locked up with the alleged rapist but the cost of transportation has made her visits inconsistent.

Onyeji, who was preparing beans as at the time this reporter got to her apartment said she would be taking part of the food to Panti for her husband. She said that the issue is taking a toll on her and her remaining six children since she doesn’t have enough time to cater for them.

The mother of eight said during her last visit to Alausa, she was advised to get a lawyer but the lawyer that is helping her called her and stated that he’s tired of the case already. The lawyer who had promised that the whole issue will subside this week told her that it’s no longer possible because the case had been taken over by Lagos State government. He said it’s no longer in the hands of human rights organizations or the police.

As a mother whose daughters were taken away from her, Onyeji is living with regrets. She told Saturday Sun that she regrets ever welcoming the fake pastor around her family. She noted that the accused is a friend of the family because he is a member of the church branch where her family worships.

“We have known him for more than seven years. He visits us, prays for us and preaches to us. That man deceived me. He brought an ID card to show that he belongs to the pastorate. He wore Chosen church jacket. He said that the General Overseer of the church had appointed him to conduct family liberation for church members.”

According to Onyeji, the accused said the church gave him a car immediately he became appointed as a pastor. He also told her that one Pastor Herbert at Ijesha pays him monthly for his pastoral duties.

The mother of the victims said that the accused is a popular person in the area known as a pastor who comes to preach to her family, and others in the compound. He is also known for morning cry and participation in the church publicity.

“He actually told me that he would marry my first daughter and I told him that the girl is still too young to marry because she’s 17. She’d be 18 by next month so I told him to wait so she can sit for her WASSCE examination by next year and he can decide to marry her, because by then, she would be 19. That was our agreement, even my husband agreed to that. He even promised to sponsor her University education and also pay for her WAEC exam fees.”

Wiping her eyes, Onyeji said she had no idea that the ‘pastor’ was already having carnal knowledge of her daughters and was shocked that her younger daughter, who is just 13 years old is also being molested by the same man.

She noted that the mistake she made was to allow her daughters visit the man at his residence in Arowojobe Street where he allegedly raped the duo repeatedly while threatening her younger daughter with death if she speaks up.

“I warned my girls to stop visiting him but he will complain to my husband that I’m stopping my children from listening to the word of God and living a righteous life. He claims that he’s teaching them to fear God and that if I stop them, they might end up following hoodlums. Once he says that, my spirit would be overcome with fear and I know that a child is not trained by only one person. I never knew I had entered into one chance. The major issue now is that they never told me anything. If they had, I might have found a solution on time.”

Speaking on her reaction during the arrest of the young man, she said that she wasn’t trying to stop the police officer from arresting the culprit but was overwhelmed with the pace at which her life tumbled. As at then, she didn’t understand what was going on. She said she was blocking the police officer not to arrest the man so that they can settle the matter amicably.

When Saturday Sun asked her how she got to know that the girls were pregnant, Onyeji said she noticed that the girls had not asked for money to purchase their sanitary pads for their monthly flow and when she asked them what the problem was, her elder daughter told her that it might be that they have infection and that she should still hold on first.

Onyeji said she decided to take them to the health centre to find a cure for the ‘infection’ only to discover that they were both pregnant. The nurse on duty offered to help and called a human rights organization.

For Onyeji, engaging in religious activities is off her agenda for now. She stated that she will never trust anyone again or go back to church because the trust she has in the church is gone.

“This man wronged me. If I chased him away, it would be as if I’m putting God far away from my family. As I am now, this issue has brought shame to me and my family. My neighbours mock me and laugh whenever I pass by.”

She stated that even though some members of the church have visited her to find out what happened the pastor of the branch where she worships has not contacted her.

Spokesman of the Lord’s Chosen Charismatic Revival Ministry, Ijesha, Pastor Louis Chidi said that Anyanwu is not a pastor but a member who is a mechanic by profession. He stated that Anyanwu is a family friend of the affected victims who pays their house rent regularly and also assists them financially.

According to a press release issued by the church, “Our attention has been drawn to the story which has gone viral on social media, of one Mr. Nduka Anyanwu who claimed to be one of the Pastors of the Lord’s Chosen Church and who allegedly defiled two minors from the same parents. We, the pastoral council of the Lord’s chosen Ministry after thorough and conscientious verification wish to state categorically that the said Nduka Anyanwu is not and has never been enlisted in our pastoral workforce.”