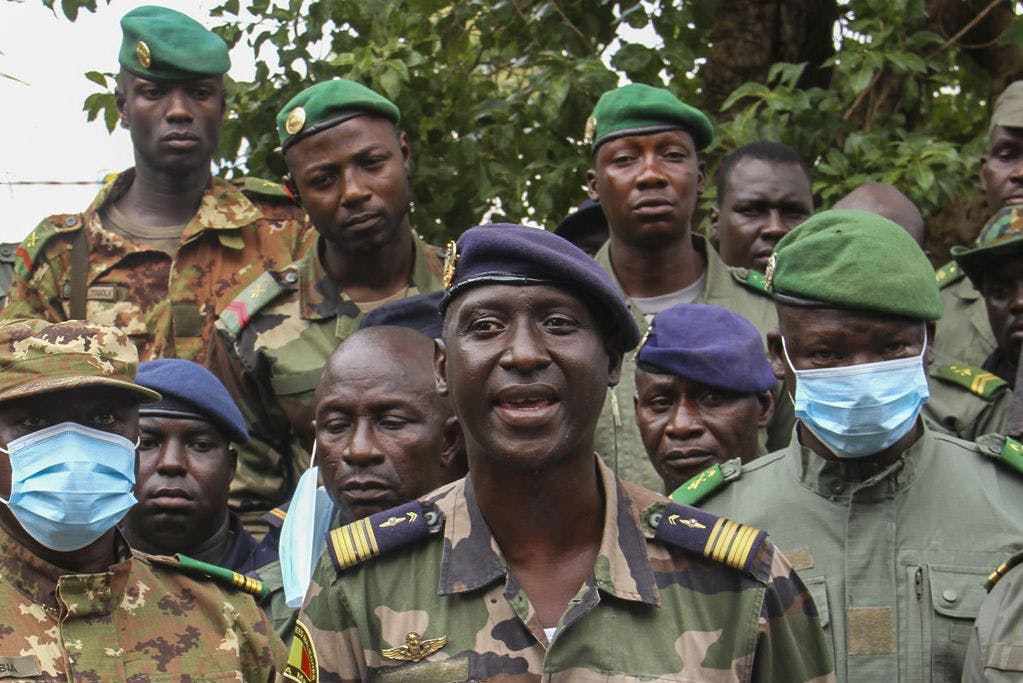 On Wednesday, African and Western leaders condemned the junta that forced Mali’s president from power, warning the coup was a deep setback for the West African nation that could threaten the battle against Islamic extremism.

Soldiers calling themselves the National Committee for the Salvation of the People promised that they would ultimately hand power to a transitional civilian government but gave no timeline. Junta members urged Malians to return to business as usual.

Condemnation of the coup was strong and swift from many quarters, reflecting international concern about instability in Mali and West Africa more broadly amid increasing attacks by Islamic extremists and the ensuing economic fallout, which has been among the drivers of illegal migration to Europe.

The African Union suspended Mali from the bloc, and the West African bloc ECOWAS said it would stop all economic, trade and financial flows and transactions between member-states and Mali.

Former colonizer France, which has worked to stabilise the country since leading a 2013 military operation to oust extremists from power in the north, called for an immediate return to civilian rule.

Paris, which has more than 5,000 troops stationed across the Sahel region including in Mali, also joined the condemnation with Foreign Minister Jean-Yves Le Drian saying in a statement that France “strongly reaffirms its full attachment to Malian sovereignty and democracy.”

“The US opposes all unconstitutional changes of government whether in the streets or by security forces,” tweeted J. Peter Pham, the State Department’s special envoy for the Sahel region.

“The priority is to not lose the fight against terrorism,” said a French official who spoke on condition of anonymity because he was not authorized to be publicly named according to official policy.

U.N. Secretary-General Antonio Guterres and the Security Council called for the immediate release of Keita, the prime minister and others.

The U.N. is spending $1.2 billion a year on a more than 15,000-strong peacekeeping mission in the country, and the body’s peacekeeping chief Jean Pierre Lacroix told a closed Security Council meeting Wednesday that the force “remains committed to playing its mandated role … but the country must swiftly regain a measure of institutional stability and Constitutional order.”

Tuesday’s developments “represent an enormous setback” after seven years of investment by international partners to address Mali’s insecurity and political challenges, said Judd Devermont, the director of the Africa Program at the Center for Strategic and International Studies.

The country “is going to be paralyzed by the political jockeying over the future, and our ability to work with the government and security services is going to be undercut and restrained,” he said. “This intermediary period is really dangerous for the region’s security.”

“This can in no way be a response to the deep socio-political crisis that has been hitting Mali for several months,” he added.

A day earlier, armed soldiers fired into the air outside President Ibrahim Boubacar Keita’s home and took him into their custody. A distressed Keita announced his resignation on television.

Speaking on national broadcaster ORTM just before midnight, a distressed Keita, wearing a mask amid the COVID-19 pandemic, said his resignation — three years before his final term was due to end — was effective immediately. A banner across the bottom of the television screen referred to him as the “outgoing president.”

READ  NATO shows Russia its military might in giant exercises

“I wish no blood to be shed to keep me in power,” Keita said. “I have decided to step down from office.”

He also announced that his government and the National Assembly would be dissolved, certain to further the country’s turmoil amid an eight-year Islamic insurgency and the growing coronavirus pandemic.

The soldiers said on Wednesday that “social and political tension has undermined the proper functioning of the country for quite a while”.

In a statement carried overnight on state broadcaster ORTM, the mutinous soldiers identified themselves as the National Committee for the Salvation of the People led by Colonel-Major Ismael Wagué.

Wagué added: “Real democracy doesn’t go with complacency, nor weakness of the state authority which must guarantee freedom and security of the people.”

The news of Keita’s departure was met with jubilation by anti-government demonstrators.

“All the Malian people are tired — we have had enough,” one demonstrator said.

The detention was a dramatic change of fortune for Keita, who seven years earlier emerged from a field of more than two dozen candidates to win Mali’s first democratic post-coup election in a landslide with more than 77% of the vote.

Regional mediators from ECOWAS, though, had failed in recent weeks to bridge the impasse between Keita’s government and opposition leaders, creating mounting anxiety about another military-led change of power.

The troops responsible came from the same military barracks where a coup was launched more than eight years ago, allowing the Islamic insurgency to take hold amid a power vacuum.

The military has taken a beating over the past year from Islamic State and al-Qaida-linked groups. A wave of particularly deadly attacks in the north in 2019 prompted the government to close its most vulnerable outposts as part of a reorganization aimed at stemming the losses.

Keita believed to have military backing

Keita, who tried to meet protesters’ demands through a series of concessions, has enjoyed broad support from France and other Western allies. He also was believed to have widespread backing among high-ranking military officials, underscoring a divide between army leadership and unpredictable rank-and-file soldiers.

Tuesday marked a repeat of the events leading up to the 2012 coup, which unleashed years of chaos in Mali when the ensuing power vacuum allowed Islamic extremists to seize control of northern towns. Ultimately a French-led military operation ousted the jihadists, but they merely regrouped and expanded their reach during Keita’s presidency into central Mali.

Keita’s political downfall closely mirrors that of his predecessor: Amadou Toumani Toure was forced out of the presidency in 2012 after a series of punishing military defeats. That time, the attacks were carried out by ethnic Tuareg separatist rebels. This time, Mali’s military has sometimes seemed powerless to stop extremists linked to al-Qaida and IS.

A French-led military operation eventually ousted the jihadists, but they then regrouped and expanded their reach during Keita’s presidency.

Back in 2012, the mutiny erupted at the Kati military camp as rank-and-file soldiers began rioting and then broke into the camp’s armoury. After grabbing weapons, they later headed for the seat of government under the leadership of Capt. Amadou Haya Sanogo. Sanogo was later forced to hand over power to a civilian transitional government, which then organized the election Keita won.

Mediators this time around have urged Keita to share power in a unity government. He even said he was open to redoing disputed legislative elections. But those overtures were swiftly rejected by opposition leaders who said they would not stop short of Keita’s ousting.