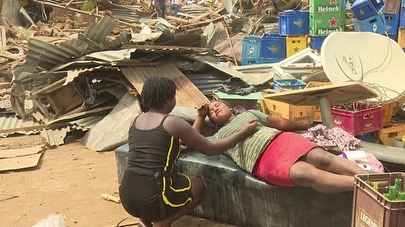 Many people in Abuja have been rendered homeless after FCTA officials demolished structures on Saturday.

There was serious pandemonium on Saturday as hundreds of families were rendered homeless at Apo Akpmajenya in Federal Capital Territory, Abuja, after FCTA demolished no fewer than 134 houses.

According to Sahara Reporters, tesidents were seen running in different directions while bulldozers and other heavy duty equipment arrived the area for the exercise.

The FCTA said the demolition of the houses was to pave the way for construction of a major road network in the area.

The demolition, which was coordinated and carried out by the FCT Task Force on City Sanitation, took place in the early hours when residents of the community were yet to fully get out of bed.

Some of those whose houses were demolished described the exercise as ‘wicked’ and blamed the FCT authorities of not providing them with an alternative.

A man, who identified himself as Ezekiel John, said he lost his house and shop to the demolition.

He said, “They came with bulldozers and started destroying everything in sight. They didn’t even allow us salvage our properties.

“When they brought the notice initially, we asked them to provide us with an alternative place but nobody answered us.”

Meanwhile the Director, Department of Development Control, Mallam Muktar Galadima, while addressing journalists said that those houses had been marked for demolition since January 2020.

Galadima also said that prior to the exercise, the FCTA through its relavant agencies had interfaced with residents of the settlement on the need for them to vacate the area, which falls within the corridor of the planed Outer Southern Express Way.

He added that the settlement falls on one of the roads linking Oladipo Diya, which is an arterial road, with OSEX.