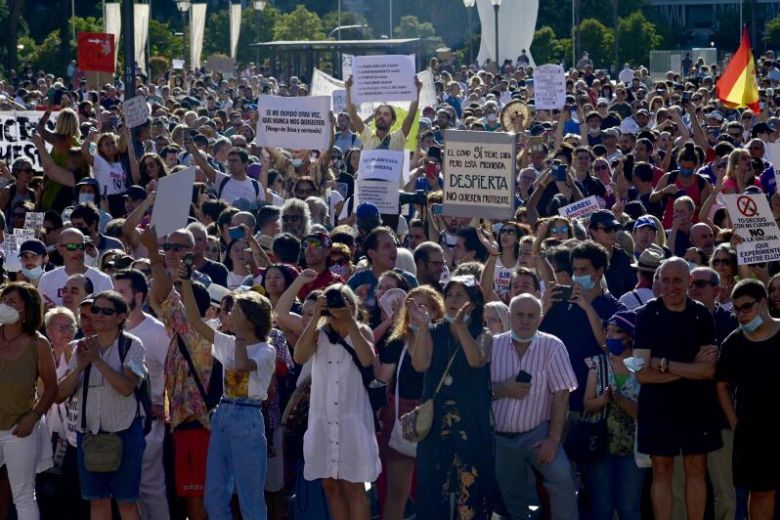 Hundreds of people gathered in Madrid on Sunday to protest against the compulsory wearing of masks and other restrictions imposed to combat the spread of the new coronavirus (Covid-19).

The crowd, mobilised through social networks, gathered under the Spanish flag on Plaza de Colón, a square in the centre of the capital.

The demonstrators carried signs proclaiming, among other things, “The virus does not exist,” “The mask kills” and “We are not afraid.”

Pilar Martin, a 58-year-old housewife from Zaragoza in the north-east of Spain, said she came to Madrid to demonstrate because she thought governments around the world were exaggerating the numbers of people infected in order to restrict public freedoms.

“They force us to wear masks, they want to confine us. It’s all lies,” Martin told AFP.

Many of the demonstrators were not wearing masks, although it is compulsory in public in Spain. Wearing masks was first imposed on public transport at the beginning of May and was later extended.

The demonstration comes two days after the government announced new restrictions, including the closure of discotheques and a ban on smoking where it is impossible to stand within two metres of each other.

As of Monday morning, Spain counted 342.813 confirmed coronavirus cases according to the latest update by the Spanish Health Ministry. Belgium, for comparison, has counted 78,223 confirmed cases as of Monday.