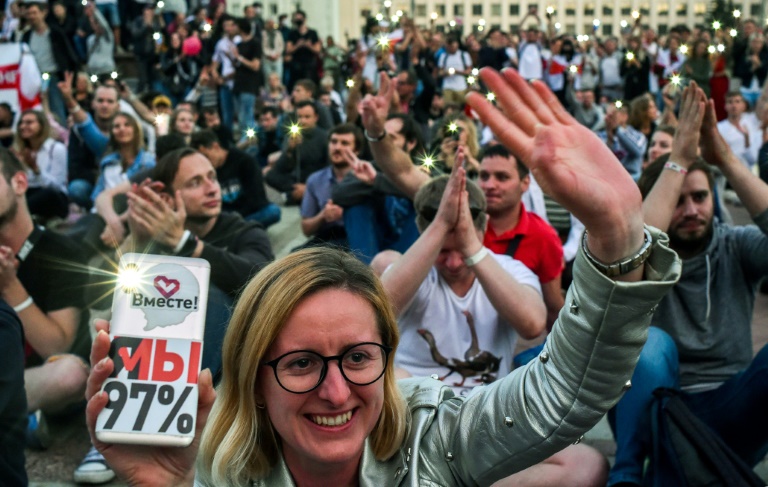 The opposition in Belarus was gearing up for a weekend of new demonstrations on Saturday, while President Alexander Lukashenko said he needs to speak to his Russian counterpart Vladimir Putin amid mounting pressure from both demonstrators and other European leaders.

With the opposition gaining momentum after days of protests over last Sunday’s disputed presidential vote, Lukashenko’s main election challenger Svetlana Tikhanovskaya has called on supporters to rally again this weekend.

They were to gather at midday on Saturday near the Pushkinskaya metro station in the capital Minsk in a honour of Alexander Taraikovsky, a 34-year-old protester who died there on Monday and whose funeral was being held.

A “March for Freedom” is planned in central Minsk on Sunday, a week after the contested election that 65-year-old Lukashenko claims to have won with 80 percent of the vote.

In a sign of the pressure mounting on him, Lukashenko said on Saturday he wanted to speak to Putin, warning that street protests were not just a threat to Belarus.

Mass unrest followed Lukashenko’s re-election victory last week, as tens of thousands of people took to the streets accusing him of rigging the vote.

“There is a need to contact Putin so that I can talk to him now, because it is not a threat to just Belarus anymore,” he said, according to state news agency Belta.

“Defending Belarus today is no less than defending our entire space, the union state, and an example to others … Those who roam the streets, most of them do not understand this.”

Tikhanovskaya, a 37-year-old political novice who ran after other opposition candidates including her husband were jailed, accuses Lukashenko of rigging the vote and has demanded he step down so new elections can be held.

She left the country on Tuesday for neighbouring Lithuania, with her allies saying she came under official pressure, but on Friday re-emerged with the call for a weekend of “peaceful mass gatherings” in cities across the country.

She is also demanding authorities be held to account for a police crackdown on post-election protests that saw more than 6,700 people arrested.

Police have used rubber bullets, stun grenades and, in at least one case, live rounds to disperse the crowds, with hundreds injured.

Officials have confirmed two deaths in the unrest, including Taraikovsky who they say died when an explosive device went off in his hand during a protest, and another man who died in custody after being arrested in the southeastern city of Gomel.

On Friday authorities began releasing hundreds of those arrested and many emerged from detention with horrific accounts of beatings and torture.

Amnesty International condemned “a campaign of widespread torture and other ill-treatment by the Belarusian authorities who are intent on crushing peaceful protests by any means”.

In some of the biggest demonstrations yet, thousands marched in Minsk on Friday to denounce the police violence and demand Lukashenko step down.

Unlike the scenes of violent detentions days earlier, police stood by quietly.

Large groups of workers from huge tractor and automobile factories downed tools for the first time and marched to the central square, chanting for Lukashenko to “Leave!” and “Long live Belarus!”.

Protesters danced and sang and waved lit-up mobile phones before gradually dispersing over the evening without police making arrests.

European Union ministers agreed Friday to draw up a list of targets in Belarus for a new round of sanctions in response to the post-election crackdown.

Sweden’s Foreign Minister Ann Linde said in a tweet that the “EU will now initiate a process of sanctions against those responsible for the violence, arrests and fraud in connection with the election”.

Lukashenko, who has ruled Belarus with an iron grip since 1994, has dismissed the demonstrators as foreign-controlled “sheep” and “people with a criminal past who are now unemployed”.

In a televised meeting on Friday he claimed people had arrived from Poland, Ukraine and the Netherlands as well as from Russian opposition groups, and were using protesters as “cannon fodder”.

Meeting security chiefs, he urged restraint against protesters, saying: “If someone has already fallen and is lying there, you shouldn’t beat him up.”

Tikhanovskaya on Friday announced the creation of a Coordination Council to ensure a transfer of power, asking foreign governments to “help us in organising a dialogue with Belarusian authorities”.

She demanded the authorities release all detainees, remove security forces from the streets and open criminal cases against those who ordered the crackdown.