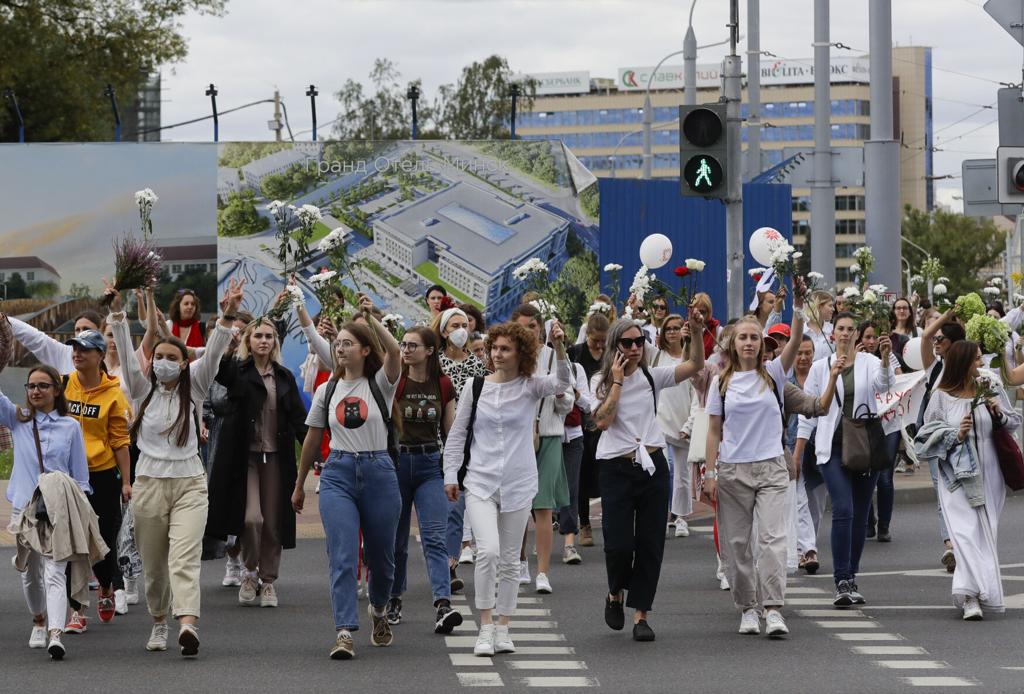 Tens of thousands of Belarusians staged a wave of peaceful protests on Thursday against President Alexander Lukashenko’s disputed re-election and an ensuing brutal police crackdown.

In apparent concessions on Thursday evening, Belarus announced the release of more than 1,000 detained protesters and the interior minister apologised to injured bystanders.

This came as European countries condemned the police violence and the European Union was set to discuss possible sanctions on Friday.

On Thursday evening in central Minsk crowds stood on the street cheering as cars drove past honking horns in support without any detentions, an AFP journalist saw.

Earlier an AFP journalist estimated tens of thousands of people, many wearing white and holding flowers and balloons, lined roads and filed through the capital Minsk to protest against police brutality during four nights of unrest since Sunday’s vote.

Similar human chains formed in half a dozen other cities, local media reported.

Senate Speaker Natalya Kochanova said on television that Lukashenko had ordered officials to review detentions and more than 1,000 detained at protests had been released.

The interior ministry has said it has detained some 6,700 people at daily protests since Sunday.

Interior Minister Yury Karayev said on state television: “I apologise for the injuries of random people at protests who got caught in the middle.”

Lukashenko’s opponents accuse him of rigging the election to defeat his main rival, popular opposition candidate Svetlana Tikhanovskaya, who has left the ex-Soviet country for neighbouring Lithuania.

People came out to contest the vote results and police used stun grenades, rubber bullets, tear gas, water cannon and, in at least one case, live fire to disperse the crowds.

At least two people have died and hundreds have been wounded in the violence while nearly 7,000 have been arrested.

On Thursday, demonstrators held placards reading “Change!” and “No violence” and wore white bracelets, one of the symbols of the opposition movement.

“We want to show that we, the women of our country, are against violence,” said Yekaterina, a 38-year-old hairdresser wearing a white sweater and jacket and holding a bunch of white flowers.

Russia’s foreign ministry on Thursday backed Lukashenko, claiming it knew of “clear attempts at outside interference” and saying it was “concerned” at the unrest.

The leaders of neighbouring Poland and the Baltic states urged Lukashenko to “terminate the use of force against your people immediately.”

European Union foreign ministers were set to discuss possible new sanctions on Belarus at an extraordinary meeting on Friday and Germany summoned the Belarusian Ambassador.

Prominent Belarusians have condemned the violence and urged Lukashenko, who has ruled Belarus with an iron grip since 1994, to step down.

In an interview with RFE/RL, writer Svetlana Alexievich, winner of the 2015 Nobel Literature Prize, spoke of her shock at the “inhumane, satanic” actions of riot police and urged Lukashenko to go peacefully.

The interior ministry on Wednesday acknowledged police deliberately fired on a group of protesters, wounding one.

Police said a protester died on Monday when an explosive device went off in his hand, while his widow told local media he was unarmed.

The Belarusian Investigative Committee, which probes major crimes, on Wednesday said a 25-year-old man died after he was detained on Sunday in the southeastern city of Gomel and sentenced to 10 days in prison.

His mother told local media he had heart problems and had gone out to see his girlfriend, not to take part in protests.

The protests broke out after authorities said Lukashenko won 80 percent of the vote in Sunday’s election to secure a sixth term.

Lukashenko, 65, has dismissed the demonstrators as foreign-controlled “sheep”.

The protest movement arose in support of Tikhanovskaya, a 37-year-old political novice who ran for president after potential opposition candidates including her husband were jailed.

The official results gave her 10 percent of the vote, but Tikhanovskaya said the election was rigged and claimed victory, demanding that Lukashenko hand over power.

She left for neighbouring Lithuania on Tuesday as allies said she came under official pressure.