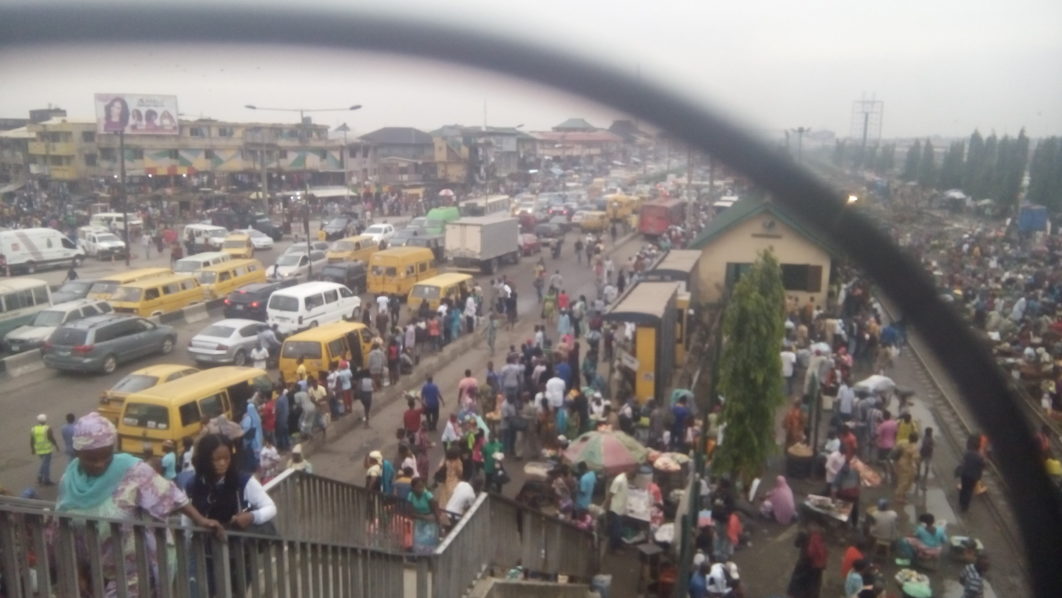 One place you don’t want to be caught stranded at night in Lagos is the precinct of Bolade Oshodi.

During the day, the area is usually bustling with market activities but once darkness descends, motorists and road users are frequently at the mercy of hoodlums who prowl the area usually on motorcycles, looking for unsuspecting persons to attack. Many incidents of car hijacking, traffic and one-chance robberies have been reported in the axis around the Oshodi bridge.

On Tuesday morning, it was an unusual scene when a crowd gathered at the Bolade Bus Stop around a woman in her mid-30s, who had bloodstains but appeared to have temporarily suffered memory loss and forgotten her destination.

Eyewitnesses who lifted her from the road untoa chair said they saw a man who was with her before leaving her alone at about 5:00a.m. and immediately took to his heels before he could be apprehended.

One of them said: “At about 10 minutes past 5a.m., this morning, I saw a man with her at the front of our house. Not long after, I saw the man walking away, I shouted at him to come back, but he ran. I and some other persons offered her a seat and asked her name, phone number and her destination, which she did not answer.

“Some said she may have come to the nearby inter-state park before the night curfew caught up with her at the bus terminal. The only thing we found on her was a POS teller of N59,000, some wigs, clothes, lady’s packages and a Catholic rosary in her backpack. For over two hours, she just stared blank without responding to any inquiries.”

The lady, who later identified herself as Ifeoma from Igbo Etiti, Enugu State, after series of deliverance prayers by passersby, was eventually taken by officials of the Lagos State Emergency Management Agency (LASEMA) from the scene. According to passersby, she may have been hypnotised before being robbed or something sinister done to her, warranting dripping of blood from her body.

On Friday night, a motorist escaped being robbed and his car stolen at the bus stop when he tried to slow down to check a knocking sound from his car engine. From nowhere, some young boys pounced on him and vandalised the vehicle before he could manage to zoom off.
Surprisingly, the whole area was swept clean of hoodlums on Tuesday when the governor, Babajide Sanwo-Olu, paid a visit to the area to commission the Oshodi-Abule Egba BRT corridor. The usual mass of idle young boys prowling under the bridge and Bolade corridor were visibly absent before and while the ceremony lasted.

According to a passerby, Eniola Okunuga: “Anytime you see orderliness around Oshodi, just know that the governor is around. It was like a miracle when I saw that there was no traffic descending to the Oshodi Bridge. The Oshodi to Ajah buses were not parked at their usual spot causing traffic and there was a LAWMA vehicle cleaning the entire stretch back to back as police patrol vans were parked in their numbers, while policemen mounted sentry at almost every corner and angle in Oshodi.

“It was when I went further I knew the reason; Sanwo-Olu was coming to commission the BRT park. How do our leaders know what citizens go through daily when they are shielded from the reality?”

When The Guardian visited the area yesterday, residents of the area said many of those inflicting pains and terror on passersby are the idle youths from neighbouring states like Ogun and Oyo, who invaded Lagos in search of greener pasture but fell into the company of some hardened criminals sleeping under the bridge.

A resident, Akin Olatunde, said: “Many of the hoodlums are teenagers. Even females are part of them now. They go about with tattered clothes, dirty fingernails and unkempt hair, while sleeping under the bridge and in market stalls.”

Another resident stated that their new dressing room and wardrobe is the newly constructed bridge.

“They wash and spread their clothes on the hangers and remove them very early in the morning. They also sleep on the bridge and across the railway terminal, which is by the army cantonment. I have tried to challenge and chase them away several times, but we seem to be their enemies when we do that. Nobody dares walk past that route at night without them causing the person harm,” he said.

A police officer affirmed that the reason the hoodlums deserted the bridge on Tuesday was because of the presence of the governor.

“They had on the night before raided the area and arrested some hoodlums while others ran away into adjourning streets. Most of them came all the way from Ibadan to this city in the name of hustling with no definite place to stay. It is sad that this new bridge has become a new home for them.”