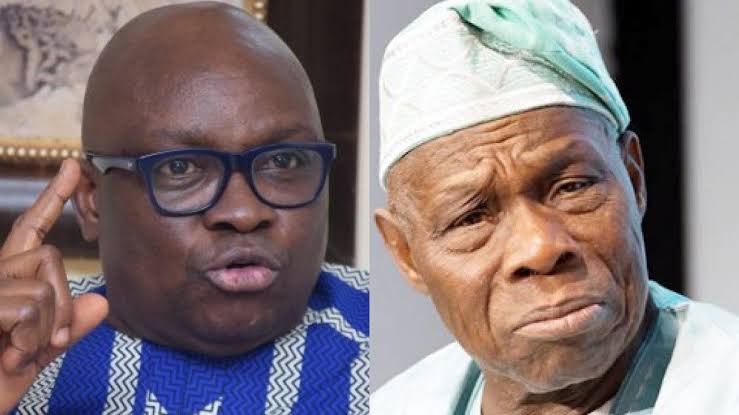 Fayose said he would send Obasanjo back to prison if he becomes president for alleged grievous crimes committed against Nigeria.

A former governor of Ekiti State, Ayodele Fayose has vowed send ex-President, Olusegun Obasanjo, back to prison when he have the opportunity to become the President of Nigeria.

Fayose who stated this during an interview with PlusTV, said he will ensure that Obasanjo give account of all the alleged fraud carried out during his eight-year tenure.

The former governor also accused the former President of making hate speech and asked the present administration to make him face the law.

“Let me tell you, Obasanjo has made hate speech and should be brought to book by this government,” Fayose said.

“I pray one day I will become President of this country by God’s grace. Obasanjo will go back to prison. I am telling you the truth because there are so many things Obasanjo must be questioned about.

“Obasanjo is not a saint. When he came out of prison, his farm at Ota was in shambles. But, today, it is back to life. Where did the money for resuscitating the once ailing farm come from? It was from the government.

“For the library, all governors at that time contributed N10m each to support Obasanjo by force. The third term is still fresh in our memory. So, baba should stop telling us he is a saint.

“Shagari was not good enough. He imposed him on Nigerians. He brought Yar’ dua and Jonathan. Nobody is good to Obasanjo except himself.”

The former Ekiti governor also criticized Obasanjo for his comments on late Buruji Kashamu, saying he had paid his own dues and spent his time on earth.

“Whatever you say about Kashamu. He has paid his own dues, spent his time. No court convicted him and he left and departed the world. Everybody will have an end. Let wait and see how Obasanjo will end,” he added.

Fayose had previously attacked Obasanjo over his condolence message to Kashamu, who died from COVID-19 complications at a Lagos hospital last Saturday.

Before his death, Kashamu was wanted in the United States for alleged drug offences but was able to escape extradition from Nigeria to the US to face his trial.

In a sarcastic condolence message, Obasanjo said Kashamu’s life was a lesson for all because in his lifetime he manoeuvred the law and politics to evade justice over his alleged criimes, but couldn’t escape death.

His comments did not go down well with a lot of Nigerians who were quick to condemn the former president for ‘disrespecting’ the dead.

In a swift reaction, Fayose asked Obasanjo to stop acting like “a saint”, noting that Nigerians will watch out for his own end. He added that “He (Obasanjo) should also remember that his own end will come too and nobody knows how the end will be.”

Obasanjo replied saying that Nigerians can mourn him anyway they like after his death, as he only cares about how his maker (God) thinks of him.