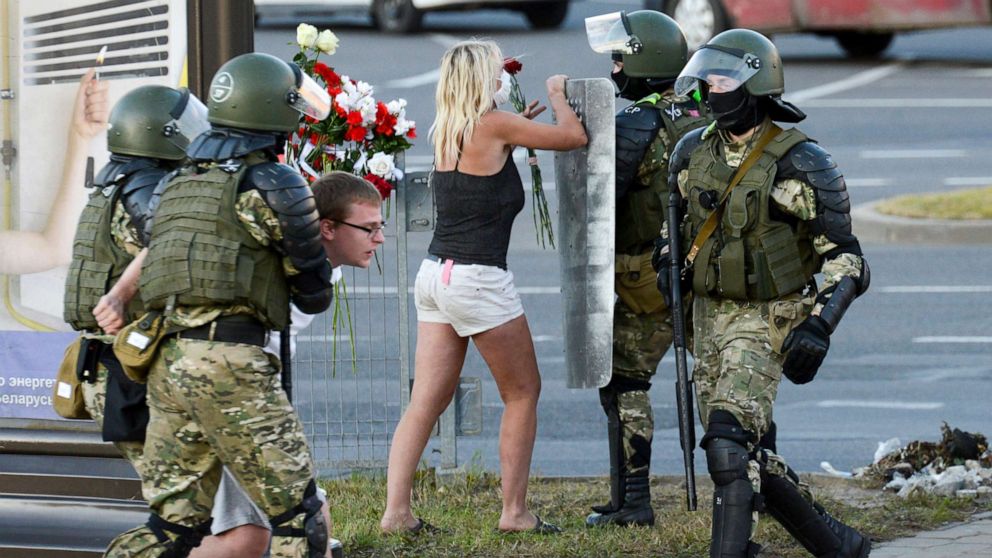 Hundreds of people took to the streets of Minsk and several other cities in Belarus on Tuesday evening, in a third straight night of protest following the disputed re-election of President Alexander Lukashenko.

The demonstrations continued despite a massive police crackdown that prompted a warning of possible European Union sanctions.

There were more clashes between the protesters and police who used stun grenades and rubber bullets to disperse the crowds continued well into the night.

Police continued to detain people in an attempt to quell unrest. Dozens were held in the capital and human rights group Viasna also reported mass detentions in the cities of Grodno, Brest and Vitebsk.

Several journalists were injured in Minsk, and some were detained by police. Memory cards were seized from a group of photographers, including one from the Associated Press, as they were documenting clashes between police and protesters.

Euronews international correspondent Anelise Borges, in Minsk, says the police seemed much more organised than on previous nights and were very quick to disperse the crowds.

Thousands of people have been detained and dozens injured after the three nights of protests.

Belarusian President Alexander Lukashenko has been accused of rigging the ballot after Sunday’s election, which the authorities say gave the long-standing authoritarian leader a sixth term with a landslide 80% of the vote.

Belarus’ leading opposition candidate said on Tuesday she had fled her country for Lithuania for her own wellbeing and for that of her children in the wake of the elections.

Sviatlana Tsikhanouskaya said she made the decision “absolutely independently” to leave adding the current situation in Belarus was “not worth any life,” referencing the violent protests.

The EU’s foreign minister on Tuesday slammed the violence against protesters, calling the elections “neither free nor fair”.

Calls to scale down rallies

Protesters in Minsk were called upon to scale down rallies ahead of the third night of demonstrations following Sunday’s disputed presidential elections, marking a change in strategy.

Demonstrators were asked to gather in “small groups of up to 20 people” in a message on Belarus-based online media Nexta’s encrypted Telegram channel.

The online organisation, which is not state-run, has over 1.3 million subscribers on the platform.

“Be like water”, the message added — using a famous quote from martial arts star Bruce Lee that became a slogan of Hong Kong protestors.

The tactic saw protesters in the territory coming together quickly and dispersing throughout the city.

A witness in central Minsk told Euronews on Tuesday they “haven’t heard the usual explosions” that rang out during the two previous nights of demonstrations, but added they believed the demonstrations had moved to the city’s periphery.

Nexta describes itself as a decentralised media and is present on several messaging platforms, as well as YouTube.

It has become a key source of information for many as reports said internet service had been “significantly disrupted” in the country since Sunday’s elections.

Online monitor NetBlocks said that internet connectivity in Belarus had been significantly disrupted as of Sunday August 9 amid tense presidential elections — an incident that the observatory said was ongoing as of Tuesday afternoon.

As the internet remained down, thousands of Belarusians on Tuesday struggled to find out what had happened to missing relatives.

The interior ministry said that 2,000 people had been detained after Monday’s protests, on top of some 3,000 earlier arrests in the wake of Sunday’s election — 1,000 in the capital Minsk.

Hundreds of relatives gathered outside a detention centre in Minsk on Tuesday, demanding officials provide information of protesters held inside.

Violent demonstrations in the wake of Sunday’s election had left one person dead, an interior ministry spokeswoman said on Monday.

Those held during Tuesday’s demonstrations included people who brought flowers to the place where the protester died the previous night.

On Monday police were seen using flash-bang grenades and rubber bullets to push back thousands of protesters who flooded the streets across the country for a second consecutive day.

Euronews correspondent Anelise Borges says protesters have told her they are determined to continue to take to the streets and make their voices heard, despite warnings from the authorities that they could face stiff jail sentences. They are looking for more help from the international community, she added.

Lukashenko, who has ruled the ex-Soviet nation of 9.5 million since 1994, has derided the opposition as “sheep” manipulated by foreign masters. The president has vowed to continue taking a tough position on protests despite Western criticism over the election.