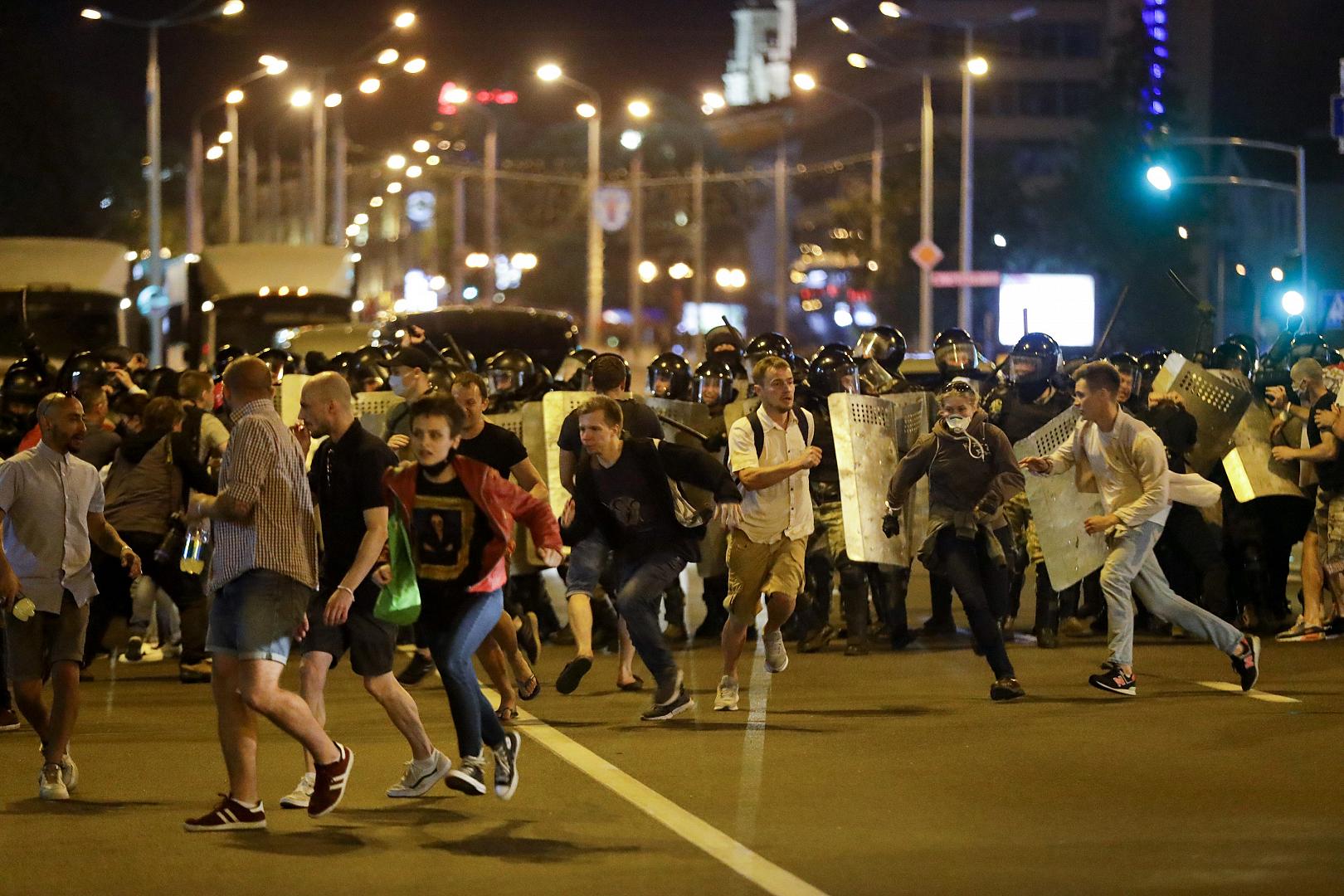 A protester in Belarus has died after an “explosive device” detonated in his hands during a rally against the reelection of authoritarian Alexander Lukashenko, according to the Belarusian Interior Ministry.

A spokeswoman for the ministry said the man had tried to throw the device at police officers at the rally in Minsk, when it exploded.

She added that a number of other people had also been injured.

Police fought with tear gas and rubber bullets against opposition demonstrators across the country for a second night on Monday after it was announced that Lukashenko had secured a landslide victory in Sunday’s vote.

One witness in Minsk told Euronews they heard “big blasts” around the city.

There had been a reported 79% turnout by 18:00 CET on Sunday — an hour before polls closed — the Central Election Commission in Belarus said.

Tsikhanouskaya, a political novice who filed her candidacy after her opposition blogger husband was jailed, rejected the claims of early results as thousands of her supporters came out onto the streets to demonstrate.

Several western powers have expressed doubts over the poll’s legitimacy and urged Lukashenko not to use force against protesters.

However, thousands of protesters were dispersed by Belarusian police as they flooded the streets in opposition to early election results that indicated longtime authoritarian leader Lukashenko had won.

Police in full riot gear responded to the marches with violent dispersal, firing flash-bang grenades and beating protesters with truncheons.

According to one leading rights group, Viasna, hundreds were detained amid the brutal crackdown.

“They are directing our sheep, who don’t understand what they are doing,” he said, warning: “We will not allow them to tear the country apart.”

A victory for Lukashenko would mark a sixth term in office for the 65-year-old, who has ruled the former-Soviet nation with an iron hand for more than a quarter of a century.

Nicknamed “Europe’s last dictator,” he warned the opposition over the weekend that if they should “provoke” him, they would get “the same answer” in return.

He said: “Do you want to try to overthrow the government, break something, wound, offend, and expect me or someone to kneel in front of you and kiss them and the sand onto which you wandered?

“This will not happen.”

Injuries, too, were reported among the protesters on Sunday night — the Associated Press said one of its journalists had been taken to hospital after being beaten by police.

Pavel Konoplyanik, a 23-year-old protester accompanying his friend to Minsk’s No 10 hospital for treatment, said: “It was a peaceful protest, we weren’t using force.”

Both he and his friend had been injured, with the former being cut by fragments of police grenades and the latter getting a plastic grenade fragment lodged in his neck.

Konoplyanik added: “No one will believe in the official results of the vote. They have stolen our victory.”

The 23-year-old said he didn’t want to leave his country, but thought they may eventually be no other choice.

Speaking to Euronews, Andrei Vardomatski, the director of social sciences at the Belarussian Institute for Strategic Studies, said there was an “emotional cognitive dissonance” between the number of voices on the streets and official results.

He said: “Nobody believes this. The quantity of protesters in regional centres is comparatively the same as in Minsk.

Eyewitnesses said that stun grenades were used against protesters and the pavement had been broken in the areas where these were thrown. Videos showed small explosions that set off car alarms in a building.

Belarus has a long history of violent crackdowns on dissent, with protesters being beaten after an election in 2010, where six candidates were also arrested.

Keeping this in mind, Tsikhanouskaya called for a “peaceful” night on Sunday, and said she had hoped officers would not use force.

The former English teacher may not have any experience in politics, but she has managed to unite opposition groups under her name and attracted tens of thousands of people to her rallies after emerging as an unlikely candidate to take on Lukashenko.

It came after two other opponents, Viktor Babariko and Valery Tsepkalo, had their candidacies rejected.

Babariko is the head of a Russia-owned bank and had been jailed for charges that he maintains are political, while Tsepkalo is an entrepreneur and former ambassador to the United States, who fled to Russia with his children after fears he would be arrested.

Tsepkalo’s wife, Veronika, stayed behind to become a leading member of Tsikhanouskaya’s eventual presidential campaign, but she, too, fled the country on Sunday due to fears for her safety.

Eight of Tsikhanouskaya’s campaign staff were reportedly arrested over the weekend.

Honest People, an independent association in Belarus that monitors elections, said observers had found at least 5,096 violations during the vote.

It also called into question the election commission’s reported turnout statistics, and said around 70 observers had been detained.

But despite widespread dissent on the streets across Belarus, with its population of 9.5 million, there are still many who have expressed support of their hard-line leader.

Retiree Igor Rozhov said Lukashenko was an “experienced politician” rather than “a housewife who appeared out of nowhere and muddied the waters”.

He added: “We need a strong hand that will not allow riots.”

The violence in Belarus has been condemned by several western powers with the European Union’s top diplomat, Josep Borrell, and the Neighbourhood and Enlargement Commissioner, Olivér Várhelyi, also calling “for the immediate release of all detained during last night. The Belarusian authorities must ensure that the fundamental right of peaceful assembly is respected.”

“Following their unprecedented mobilisation for free elections and democracy, the Belarusian people now expect their votes to be counted accurately. It is essential that the Central Electoral Commission publishes the results reflecting the choice of the Belarusian people,” they added.

“Together with France and Poland, we had called for free and fair, transparent elections, and yesterday, and also in the run-up to the elections, there was really no sign of this at all. Instead, we witnessed violence, intimidation, and arrests,” he told reporters on Monday.

The United Kingdom called on the Belarusian government to “refrain from further violence” on Monday, calling the elections “seriously flawed”.

“The violence and the attempts by Belarusian authorities to suppress protests are completely unacceptable,” FCO Minister James Duddridge said in a statement.

France called on the Belarusian authorities to exercise “the utmost restraint” when handling the protests.

“We observe with concern the violence that was directed against Belarusian citizens who went out to demonstrate after the polls closed, and call for the utmost restraint,” said a spokesman for the French Foreign Ministry.