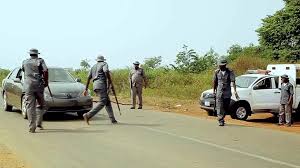 The Nigeria Custom Service (NCS), Oyo/Osun Area Command, yesterday, said officers of the command were not responsible for the shooting of a motorist in Iseyin area of Oyo State.

An officer of the NCS was reported to have shot an executive member of the proscribed National Union of Road Transport Workers (NURTW), Lateef Aboki, at Iseyin-Moniya Park in Iseyin Local Council of the state.

But Public Relations Officer of the command, Abiola Abdulahi, an Assistant Superintendent of Customs, who spoke with The Guardian, said the officers involved in the incident were not officers from the Oyo/Osun Area Command, adding that the officers were from Federal Operation Unit, Zone A of Nigeria Customs Service.

He said: “Immediately the incident reached us, the Comptroller of the Command, Mrs. Uche Ngozi, gave a directive to the residential officers at Iseyin to quickly intervene to restore normalcy around the area.

“We want to state categorically that the officers involved in the incident were not from our command but officers from the Federal Operation Unit, Zone A”.

“We are yet to come up with any official statement until properly briefed about the incident, but for now, we want to clear the air against the media reports that the officers involved were from our command.

“We didn’t have any problem with the people of Iseyin and Oyo State at large. So, we are calling for harmonious relationship between the command and the people. We also appreciate the efforts of the police towards ensuring that normalcy returns to the area,” he said.

The Customs image-maker, however, noted that the Customs’ chief frowned at having casualty during the course of discharging duties by the officers of the command.