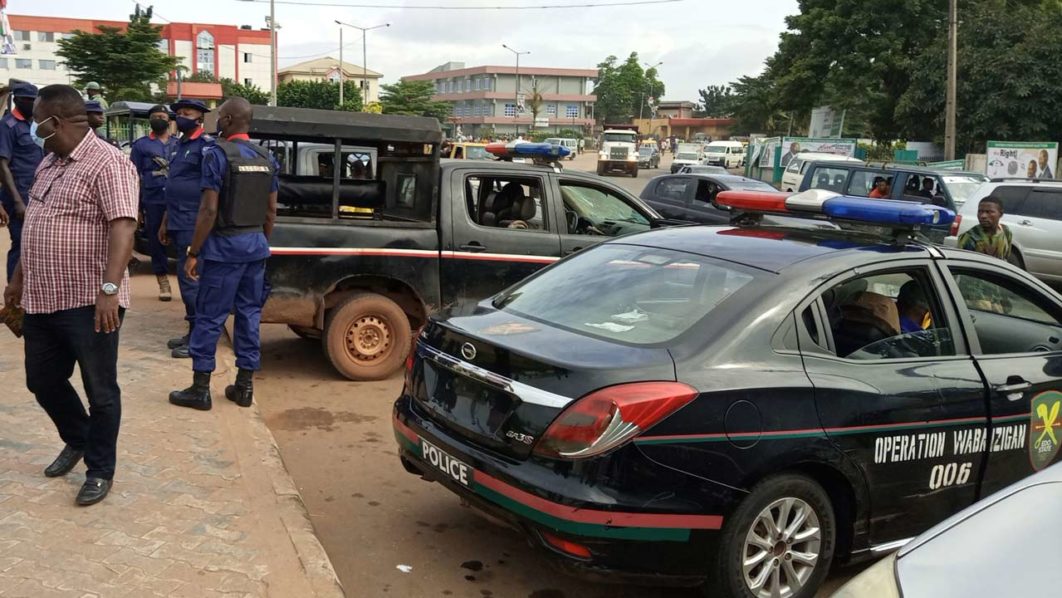 Governors elected on the platform of the Peoples Democratic Party (PDP) have risen in condemnation of what they called “Police invasion of the Edo State House of Assembly in the early hours of August 6, 2020.”

The governors alleged that the Assembly was surrounded and cordoned off by the Police without the invitation or request of the legitimate authorities of the state or the House.

This happened just as the PDP charged the Independent National Electoral Commission (INEC) to take steps to punish all offenders of the Electoral Act, particularly those who carried out acts of rigging and violence.

The PDP, speaking through its National Publicity Secretary, Kola Ologbondiyan, in Abuja yesterday, charged INEC to go after those committing electoral violence.

“INEC know those who are responsible for the violence, they should not wait, because it is already happening in Edo State. INEC knows these people.”

The PDP governors said the alleged invasion of Assembly by Police was to give cover to the unlawful and illegal attempt to seize the House in aid of unconstitutional acts being hatched by some former members-elect.

The governors, in a statement signed by the Director General of its forum, Cyril Maduabum, further condemned “as illegal, unconstitutional, and an act of impunity, the purported swearing in of some members-elect and purported election of new presiding officers in a private residence in Benin without the legitimate officials of the Assembly, as required by law.

“It is the height of political brigandage and desperation. Why are the perpetrators of this illegal and unlawful activity afraid of facing the electorate in a free and fair election? Why are they afraid of the giant strides and impressive performance of Governor Godwin Obaseki?”

The opposition party governors warned that any attempt to effect an unconstitutional takeover of either legislative or executive power in Edo State would lead to unpleasant consequences far beyond the shores of the state and appealed to President Muhammadu Buhari to caution the security agencies to remain neutral and even-handed in Edo State and not lend their authority to unlawful, illegal and unconstitutional acts of a desperate gang of power mongers.

They also requested an emergency meeting of the Nigeria Police Council to deal with the increasing unconstitutional use of the Police authorities for partisan politics.

The governors called on the people of Edo State to remain vigilant, but peaceful in resisting any attempt to desecrate democracy and constitutionalism in the state, requesting security agencies to re-strategise and concentrate on the emergent threats to national security currently being experienced in many parts of the country in increased rural and urban banditry, Boko Haram insurgency and kidnapping of innocent Nigerians, who “deserve the full concentration of Mr. President and the armed forces and Police to quell.”

Also yesterday, the PDP said it had uncovered plots by the All Progressives Congress (APC) to obtain extra INEC result sheets to rig election, noting: “Our campaign has also been made aware of how Adams Oshiomhole and certain APC leaders have been threatening and mounting pressure on Chairman of INEC, Prof. Yakubu Mahmood, and other officials of the Commission to provide them with ballot papers and Form EC8 election results sheet to facilitate their plans for ballot stuffing and writing of election results.

“We have further information that the APC and its candidate have marked Edo North senatorial district as where the extra ballot papers and result sheets would be pushed to APC thugs, including those to be brought in from neighbouring Kogi State, to doctor election results for Ize-Iyamu.”

It further alleged that a location ha been established in Kogi State to be used to serve as operational base, noting that the plot is reminiscent of last year’s governorship election in Kogi State, when different election results sheets found their way to INEC collation centre, where they were admitted and declared.

It stated: “The PDP campaign said it was already aware of the plots to use cultists and thugs (lions and tigers) to convey the illegal ballot papers, result sheets as well as dangerous weapons and charms to various polling units, as well as provide illegal cover for agents to doctor results.

“We do not want to believe that our security agencies, who are paid to protect lives and property and to ensure credible and peaceful processes on election day, have abandoned such onerous responsibility to political vagabonds to reenact such irresponsible acts as had taken place in the Kano, Osun, Kogi and Imo elections.”

The PDP called on the Inspector General of Police (IGP) to stand up to the expectation of Nigerians by arresting all the hoodlums shown in a video to forestall terror on the people of Edo state.