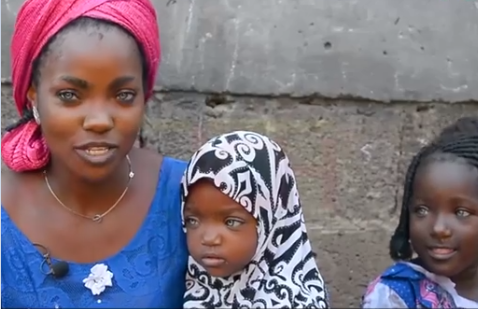 Wife of Kwara State Governor, Olufolake Abdulrazaq, has offered to help the blue-eyed Kwara mom who was abandoned by her husband after she gave birth to blue-eyed children.

Risikat Azeez moved back in with her parents after her husband, named Abdulwasiu Omo-Dada, and his family started acting up because of the unusual colour of her children’s eyes.

When the animosity got out of hand, she left and her husband never came after her ICYMI.

After Risikat’s story went viral, the Kwara State governor’s wife, Olufolake Abdulrazaq took to Twitter to express willingness to help Azeez and her kids. H.E Olufolake stated that she has been in touch with the mother-of-two through her foundation, the Ajike People Support Centre.

She added that she would also work to possibly reunite the woman with her husband, but Twitter users did not approve of that part.