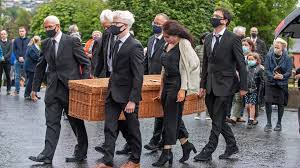 British and Irish politicians gathered in Londonderry on Wednesday for the funeral of John Hume, whose tireless efforts to bridge sectarian divides in Northern Ireland won him the Nobel Peace Prize.

Hume’s death on Monday aged 83 sparked tributes from across the world.

He was an architect of the 1998 Good Friday peace agreement, which largely ended three decades of violence that killed 3,500 people.

But his family asked members of the public to stay away to avoid a gathering that could be a coronavirus risk.

Instead, they asked mourners to light a “candle for peace” at their homes — a suggestion taken up by many people across Ireland, as well as in government buildings in London, Belfast and Dublin.

Hume first became politically active in the movement for Catholic equality in Londonderry — a city on the front line of the conflict between nationalists who favour being part of Ireland and Protestant unionists who want to keep Northern Ireland part of the United Kingdom.

He went on to become a member of the Northern Irish, British and European parliaments after helping to found the Social Democratic and Labour Party (SDLP) in 1970, which he then led for more than three decades.

A passionate nationalist with a total aversion to violence, Hume took a moderate path during the so-called Troubles.

He shared the 1998 Nobel peace prize with his unionist counterpart David Trimble.

Members of the SDLP formed a socially-distanced guard of honour as Hume’s body was brought to St Eugene’s Cathedral on Tuesday evening, accompanied by his widow Pat.

Hume had been out of the public spotlight for most of the last decade as he battled dementia, but his death triggered grief and many tributes.

Former US President Bill Clinton, another architect of the 1998 peace accord, hailed his “enduring sense of honour — he kept marching on against all odds towards a brighter future for all the children of Northern Ireland”.

Ex-British prime minister Tony Blair, another to help craft the deal, praised Hume as “a visionary who refused to believe the future had to be the same as the past”.

In Londonderry, where Hume is immortalised on the city’s famous murals, floral tributes recalled his role as a peacemaker in a time of anger and hatred.

“When you’ve carried too many coffins, and you’ve visited too many homes where sons and daughters and fathers and mothers have died, you start to see something different.”